The MSM Are The ‘Enemy Of The People’

– They Have Blood On Their Hands Already, And They Are Still Pushing For Civil War 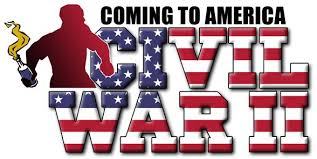 While Stefan Stanford is working to compile the most under-reported and bizarre “news,” regarding the two mass shootings in El Paso, and Dayton, for his next article, it has become apparent that one of the biggest industries guilty of fomenting “hate” in America, is the liberal establishment media with their constant “outrage reporting,” and incitement of violence against their political enemies, which happens to be conservatives and Christians.

In my last article “A Nation Of Crazy People,” we cited psychologist after psychologist describing Trump Anxiety Disorder, otherwise known as Trump Derangement Syndrome, and highlighting the one common denominator in their public statements…. and obsession with the “news” media and social media. All of them mentioned the “media” and their reporting as increasing their stress levels and the stress and anxiety in their patients.

In El Paso, the shooters “manifesto” was full of contradictory political positions, a hatred of immigrants, while favoring universal healthcare and a basic income, while the Dayton shooter was a self-identified leftist, satanist, proponent of socialism and an Elizabeth Warren fan.

Lets just stipulate that neither President Trump, nor Elizabeth Warren are responsible for what crazy people do, and going into any place and opening fire on innocents is evil and/or crazy.

The shooters alone are to blame for their plans, and pulling the triggers. Guns do not fire themselves. 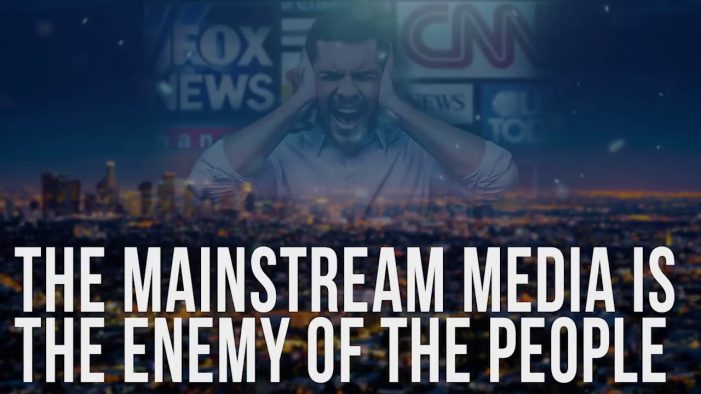 ENEMY OF THE PEOPLE: MEDIA FOMENTS HATE, DIVISION, AND VIOLENCE

The media on the other hand, does bear much responsibility, not just for constantly, and I mean every single day by constantly,  for fomenting hate, division, outrage and outright violence against anyone to the right of the center.

No, the media personalities that get paid to constantly push Americans into the next civil war, did not actually pull the trigger, but their massive presence, where their shows are shown in airports, hair salons at times, bars, and into almost every American home, via television, as well as their online and social media presence, makes them accountable to some degree when they report false, misleading and many times totally fake news, which incites violence. 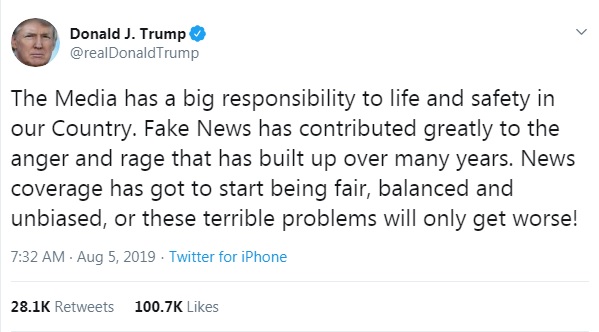 Examples can be found in their three year Russian Collusion Hoax, the attacks against innocent Covington Catholic students, their wall-to-wall coverage of the Smollett hate crime hoax, only to ignore it or downplay it once it was proven to be a hoax.

The examples are never ending as they allow their pundits to tell their audiences that anyone that supports President Trump is a “white supremacist,” or a “racist,” while they seek to justify Antifa violence against conservatives, and they actively ignore the hundreds upon hundreds of physical attacks and harassment by liberals against conservatives.

On Monday, NewsBusters, which tracks media bias, had a series of articles showing how the media is once again using the two mass shootings to foment more hate, division and trying to incite violence.