What Do NASA And The US Govt Know That We Don’t Know?

What Do NASA And The US Govt Know That We Don’t Know? By Stefan Stanford – All News Pipeline

Several years ago, NASA’s Earth Observatory website put out this story titled “NASA Radar Provides 3-D View Of San Andreas Fault“within which they not only showed a 3-D image of a small section of the 800-mile-long fracture zone but also linked to this story titled “Scientists Search for a Pulse in Skies Above Earthquake Country” which we’ll be exploring within this ANP story after a NASA jetliner startled California residents recently, flying low over large parts of the state and over the volcanoes in the state of Idaho as seen in the screenshots above and below in this ANP story.

UAVSAR works like this: flying at a nominal altitude of 13,800 meters (45,000 feet), the radar collects data over a selected region. It then flies over the same region again, minutes to months later, using the aircraft’s advanced navigation system to precisely fly over the same path to an accuracy of within 4.6 meters (15 feet). By comparing these camera-like images, called interferograms, over time, scientists can measure the slow surface deformations involved with the buildup and release of strain along earthquake faults.

With NASA817 flying over not only the San Andreas fault in California just days ago in zig zag patterns as seen in the screenshot above but also flying over dozens of potentially active volcanoes in Idaho on Wednesday as seen in the next flight pattern from Flight Aware screenshot below, do NASA and the US government know something that we don’t know? We’ll take a look within this ANP story at the latest signs of great earth changes potentially ahead including looking at what a long overdue earthquake in the Cascadia Subduction Zone off of the Pacific Northwest Coast might look like as well as new concerns being voiced by geologists over a long overdue devastating quake in the New Madrid Seismic Zone. 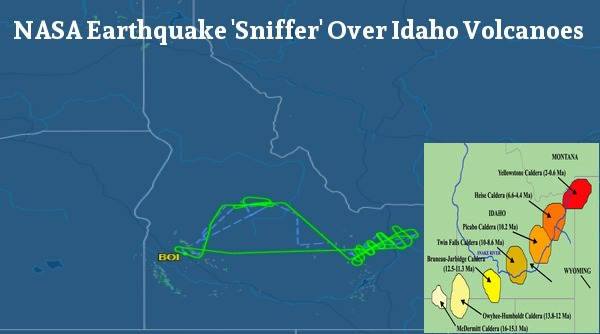 According to the director of the Southern California Earthquake Center, Thomas Jordan, “the San Andreas fault appears to be in a critical state and as such, could generate a large earthquake imminently”. Describing the situation at the southern end of the fault as “locked, loaded and ready to go“, as Strange Sounds reported in this July 21st story, there has not been a major release of stresses in the southern portion of the San Andreas fault system since 1857 so the stress between the Pacific plate and the North American plate have kept building up since then, over 150 years worth of energy.

And while the Strange Sounds story reports that we’ve had periodic big quakes along the San Andreas that have been both catastrophic and have helped to alleviate some of the energy along the fault line that’s been building up, experts are warning it’s just a matter of time before the energy accumulated over the past 150+ years explodes in a catastrophic megaquake.

In 1906, some of these stresses were catastrophically released in the San Francisco Bay area in a 7.8 magnitude event and again, in northern California, during the 6.9 magnitude 1989 Loma Prieta earthquake. Events of these magnitudes, however, have not occurred along the San Andreas fault in the south of the state – the 1994 Northridge event was associated with a nearby, but separate, fault system – leading to the suggestion that one is imminent and, given the amount of stress that might actually have accumulated, when it arrives it will be the “Big One”.

Yet as we’ll also explore within the next section of this story below, the ‘big one‘ hitting the San Andreas isn’t even the biggest earthquake threat now facing the United States, with the Cascadia Subduction Zone potentially set to pop off a quake that might make the ‘big one‘ along the San Andreas fault look like a leisurely walk in the park.