Rich People Become Poorer For The First Time In 8 Years

You will find more infographics at Statista

The decline in wealth was mostly due to the start of a worldwide synchronized downturn – originating in the Asia-Pacific region (specifically China); this decline has already wiped out $2 trillion in wealth.

The wealth report notes that the Asia-Pacific region has seen the most significant wealth decay, while Middle East wealth increased.

HNWI wealth fell across the world: Latin America declined by 4%, Europe by 3% and North America by 1%. There was a noticeable pick-up in wealth in the Middle East, generating 4% growth in HNWI wealth and increasing its HNWI population by 6% due to more favorable economic conditions. 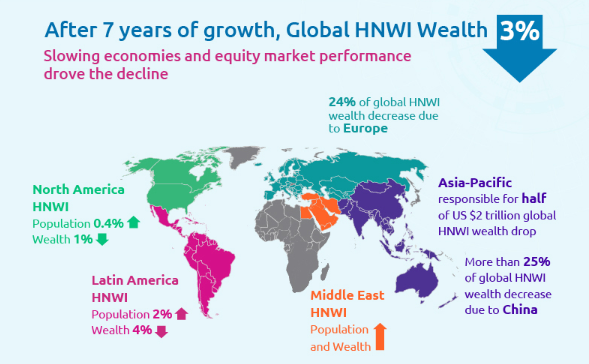 The US, Japan, Germany, and China — accounted for 61% of the total global HNWI population.

“The ultra-HNWI population declined by 4%, and their wealth declined by around 6%. This accounted for 75% of the total global wealth decrease. Mid-tier millionaires (HNWIs between US$5-30 million of wealth) made up 20% of the total decline. The millionaire-next-door segment (which represents HNWIs between US$1-5 million of wealth and makes up almost 90% of the HNWI population) was affected the least in 2018, as their wealth dipped by less than 0.5%, signifying that nearly all declines in HNWI wealth and population were driven by the higher wealth (ultra-HNWI and mid-tier millionaire) segments.”

Based on responses from more than 2,500 HNWIs across the world, cash was the top asset allocation held by HNWI as many reported that they sold equities and became defensive amid fears of a worldwide trade recession.

“Asset allocations shifted significantly, as cash replaced equities to become the most held asset class in Q1 2019, representing 28% of HNWI financial wealth, while equities slipped to the second position at nearly 26% (a decline of 5 percentage points). Volatile equity market conditions spurred a slight increase in allocation towards alternative investments to 13%, a four percentage point increase from the previous year.“