What does gridding mean?

The Arizona Mirror describes gridding as,

Part of the training for the ALPR systems, Chandler police officers are taught to “grid” neighborhoods during their downtime – systematically driving up and down every street in an area, indiscriminately scooping up information on vehicles. 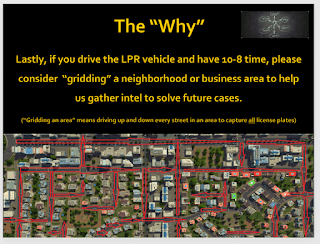 American police “gathering intel” on the public is a mirror-image of China’s “People’s Armed Police” or the United Kingdom’s “Metropolitan Police” who spy on their citizens for the government.

There is no defense for police gathering intel on innocent people, but that does not stop them from making up absurd excuses to justify it.

If your vehicle is parked in a public place or visible from a publicly accessible place, it can be recorded by anyone. Is there a reason a YouTuber can record but police cannot?

Comparing systematic police surveillance to a YouTuber recording people in public is like comparing apples to oranges.

Another bogus excuse by Big Brother was reinforced by Federal Massachusetts Judge Robert Rufo, who ruled that police ALPRs on bridges “was legal because the cameras only track movements on and off the Cape, and not movements across the state.”

What Rufo failed to mention is the only way for motorists to access the Cape is by traveling over those bridges. It might not be mass surveillance of motorists statewide but it is certainly “Mass.” surveillance of Cape Cod motorists. (pun intended.)

Fast-food drive-thrus are also planning on using ALPRS and facial recognition to identify drivers and passengers according to an article in ZeroHedge.

According to the article, customers can sign up to be spied on using a company’s loyalty rewards program much like Hertz Global Holdings. Fast food restaurants will use 5Thru.com’s ALPRs to identify customers.

Is there any way to opt-out of being tracked once you drive onto their property? What do you think?

Big Brother’s appetite for mass surveillance is appalling and it effects everyone’s ability to travel freely.

police could grid low-income or minority neighborhoods more often, which could lead to over-policing of those neighborhoods—even if there are just as many crimes in rich, white areas.

There is simply no excuse to “grid” entire neighborhoods or train police to “gather intel” on Americans without a warrant. Has law enforcement become a three letter word? Have they become DHS, FBI, CIA, DEA or ICE pawns?