The Next Gold Bull Is Here

The second half of the year is upon us and so is the new gold bull market we’ve all been waiting for.

I’ll be honest, I’m a bit giddy. Not only because the new gold bull market is here, not because gold is past $1,400/oz. and breaking out in all currencies, not because there isn’t a lot of resistance between $1,400 and $1,550, but because despite a clear emerging trend, the market, specifically the juniors, are not reacting like it.

Which means I get more time to bolster up positions.

Let’s look at some numbers.

ETF holdings increased their assets by 32 tons recently, the biggest increase since 2016, according to data tracked by Bloomberg.

Bloomberg also reported that SPDR Gold Shares, the largest exchange-traded fund backed by a commodity, attracted almost $1.6 billion on June 21, 2019, the most since its inception in 2004.

This came on the heels of the highest close since 2013 and has led the GDX 21% higher in June.

A lot of the capital inflow had been short covering or unwinding of hedges. We are nowhere near the speculative part of this cycle.

As I’ve explained before, you have to treat markets like Wayne Gretzky treats hockey pucks… go to where they are going.

The majors are reaching first — as they typically do — with companies like Barrick, Gold Fields, AngloGold, Ashanti, and Yamana gaining nearly double digits.

I’ve explained for years that for me to believe the gold rally was real it would have to rise alongside all other currencies and alongside the dollar.

How many times have you heard me say the dollar is the cleanest dirty shirt in the currency basket? When comparing it to other currencies, gold has responded beautifully. 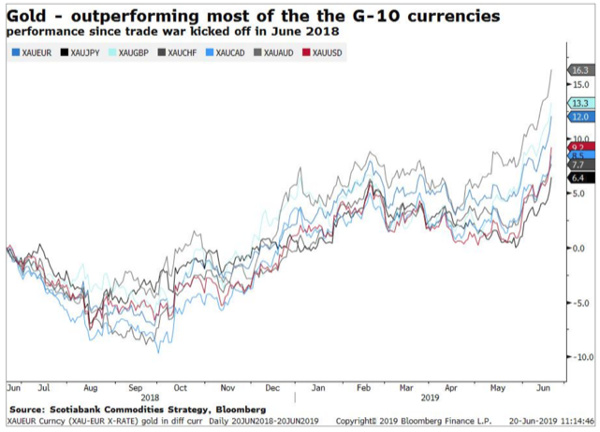 You’ll Never Be On The Inside!

So join Outsider Club today for FREE. You’ll learn how to take control of your finances, manage your own investments, and beat “the system” on your own terms. Become a member today, and get our latest free report: “The Golden Bull: Three Junior Miners Dominate 2019”

So where does the puck (gold price) go next?

The same people who couldn’t see the Fed cutting, not hiking, are now calling for four rate cuts by the end of the year. That’s not going to happen either.

What will happen is at least two cuts that help balance the deflationary pressures around the world… for now.

It is also very possible that in addition to the cuts, we end up getting an earlier-than-expected halt to the Fed’s balance sheet reduction plans.

Overseas, the ECB and BOJ have little room to do anything but continue to print money and buy back their own stocks and bonds. That’s not sustainable.

One day, people will start to add and subtract and won’t believe they’ll ever see their money again. There will be no bid and boom when you have a financial global contagion.

Here in the U.S., the Fed is now embarking on a similar path and dangerously boxing itself in, though it is far behind its Japanese and European counterparts.

BOJ Governor Haruhiko Kuroda joined in, saying he could deliver big monetary stimulus. So expect that there as well.

What will also happen is the dollar will likely head slightly lower for a month or two before Europe’s structural issues are forced back into focus in the fall.

You can then expect a dollar rally as capital flees into the safety and liquidity of the dollar.

The severity of the problems in Europe will be so pronounced that gold will rally alongside the dollar.

Before the end of 2019, you can expect higher gold prices and you can also likely expect much higher Bitcoin prices.

You can expect the juniors to respond with the beginning of a rally that will make the last several years worth the pain.

The writing has been on the wall, it’s just finally starting to be talked about. Make sure you’re positioned.