Gold, Inflation, and You

Gold, Inflation, and You by Adam English for Outsider Club

Here is a little dose of reality for all of those inflation naysayers out there:

Together, these three depressing facts mean a vast majority of Americans have seen their wealth and income crushed by inflation.

Your wealth needs to have grown about 210% over the last 30 years to have outpaced inflation.

Unless you have owned your home for 30 years or heavily invest a large portion of income in the stock market, there is little chance you have experienced anything close.

If you bought a home in 1989, on average the appreciation falls just short of keeping up with inflation.

Right off the bat, we know a third didn’t do that. And the real number is much higher.

Considering a 30-year mortgage is the longest you’ll find, only 35% of U.S. homeowners don’t have mortgage debt, and home value is the dominant form of wealth for a vast majority of homeowners, we can infer that a majority of Americans have seen their total wealth trail well behind inflation.

The S&P 500 is up around 700% over 30 years before accounting for inflation, which effectively halves the return. We know 53% didn’t ride that wave. Yet again, the real number is much higher because many had no meaningful wealth invested.

The average head of a household in the U.S.A. only has $12,000 stashed away for retirement.

That leaves income as the major source of wealth creation for well over half of Americans, which is clearly the case considering 76% live paycheck-to-paycheck.

Check out this graph to see how stunningly depressing life has been for Americans over the last 30 years:

There has been about a 33% real wage increase and a nearly 210% increase for all items in the Consumer Price Index.

Effectively, anyone dependent on wages has seen his or her purchasing power drop by half.

According to official U.S. government data, annual inflation has grown at an average of about 4% over the last 30 years. Even at today’s lower inflation rate, that is constantly eating away at your paycheck, though it is invisible.

Of course, that’s after the government implemented all sorts of shenanigans to make inflation seem artificially low. The official line used each time is that the change makes inflation data more accurate. Yet each and every time, and there have been dozens of times, inflation is tweaked down. How convenient.

If we still determined inflation using the calculations from 1980, it’d be significantly higher: 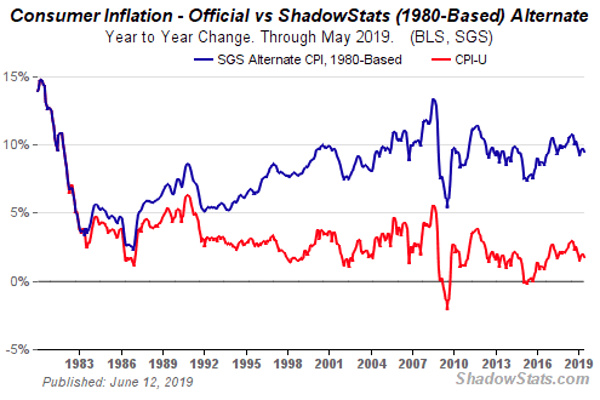 The simple fact of the matter is inflation has been the predominant reason a majority of Americans are being pushed towards poverty and deeper into debt while creating a massive headwind for wealth creation for the rest.

The low inflation we’ve seen in recent years is an aberration. There will be a return to the norm. Anyone taking the government and Federal Reserve’s dismissals of inflation concerns at face value is ignorant to reality.

The Best Way Out

I wish I had a way out for the half of Americans who don’t have any exposure to the markets or the 76% who live paycheck-to-paycheck. Inflation is absolutely crushing them.

For those of us with some money to invest, there is a tried-and-true way to offset some of the effects of inflation on our portfolios.

Get into gold and gold miners.

I know the idea is anathema to some, but we can’t really afford to avoid the reality of the situation.

The simple fact is that gold has and will continue to be the best way to protect and preserve wealth over long periods of time.

Of course, not all companies are poised to thrive in the post-correction years of gold. Due diligence is an absolute necessity.

It is a pain, I know, but there is no way around it. It feels like a full-time job. That’s because it is, and it often requires a lot of overtime, too. The Outsider Club‘s Gerardo Del Real has made a career of it.

And Gerardo’s Junior Mining Monthly subscribers now have full access to his research into three of the best gold mining stocks today. Please do yourself a favor and check them out.