Portland’s Mayor Has Sanctioned Mob Violence Against His Political Opponents

The following 10 linked stories posted over at Whatfinger News today hint of civil war unfolding in America ahead and beginning in Portland, Oregon. And while we pray that things never get that far, as we’ll explore within this ANP story, things have rapidly spiraled out of control in Portland and with antifa terrorists in Washington DC now acting like ISIS, threatening to carry out acid attacks upon peaceful, law-abiding Americans who are only exercising their 1st Amendment Rights, we’re not surprised one bit that the FBI has declared a 4th of July domestic terror warning though their mention of “white supremacists or other political radicals” leaves out the most likely group already threatening to terrorize peaceful American patriots in Washington DC, antifa.

So within this ANP story we’ll be taking a look at all of the latest signs of major trouble ahead as well as some outstanding pictures emailed to us from Portland of a June 21st ‘protest‘ in Portland by a group called ‘Extinction Rebellion‘ in which the only police officer assigned to handle it allowed the protesters to NOT ONLY direct and control traffic but ordered news photographers off of the streets. With antifa taking over the streets of Portland previously totally reminding us of Muslim no go zones in Europe, why is Portland so out of control in 2019 that journalists are being attacked there? As Instapundit recently argued, it may be time for President Trump to declare the insurrection act and send the National Guard into Portland while arresting their mayor for allowing violent terrorists to carry out terrorist attacks against peaceful, law-abiding American citizens though we’d never wish martial law upon any American city.

And with last weekend’s ‘dueling protests‘ devolving into antifa committing terrorist attacks against Americans including journalist Andy Ngo and an elderly man who was beaten with a crowbar, we’ll also be taking a look within this story at a very important email sent to us by an ANP reader who also lives in Portland, Oregon and who warns us that the mainstream media isn’t the only group ignoring antifa terrorism; local Portland news stations are barely reporting upon these ‘events‘, either, giving no advance warnings of these ‘terrorist gatherings‘ to the good people of Portland so they can avoid them. And as our reader from Portland also warns us, “vile and evil politicians” are running the show in Portland and much of Oregon.

So with Portland mayor Ted Wheeler joining other Democrats and the mainstream media in turning a blind eye to antifa terrorism upon law abiding American citizens as Susan Duclos had reported in this ANP story, hinting that things could soon get very ugly in America, we hope that everybody is ready for anything in the days ahead. Just a few of the stories on this Portland fiasco which Whatfinger linked to over the past day+ include:

Left-wing thuggery: The battle lines are being drawn in Portland, OR

VIDEO: Portland PD are cowards, allowing Antifa to split the heads of patriots with crowbars because the mayor said so. To hell with the mayor. Enforce the damned law!

Antifa Is Mostly Made Up Of Privileged White Dudes

Congressman Calls For Antifa to be Labeled a Domestic Terror Organization

Antifa Cowards In Masks Beat An ‘Old Guy’ With Crowbars 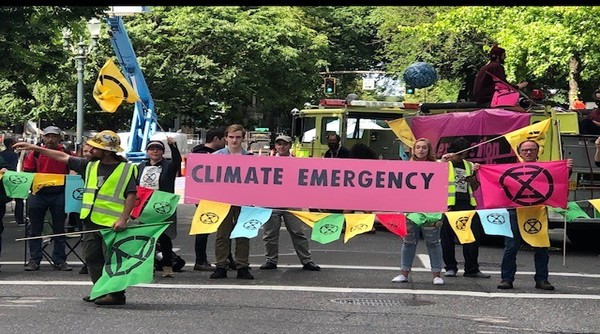 The following email was sent to ANP by Holly in Portland yesterday after she had read this story by Susan Duclos.

You wrote that none of the MSM reported on the Andy Ngo beat up. Well, none of our local news had anything about it either. When we have a demonstration downtown Portland, there is nothing in the news no warning no followups nothing. Only one TV station KPTV had anything and also the debacle in our state senate where 11 of our Republicans left so the senate couldn’t have a quorum the part on the loggers showing was not covered except KPTV. I would appreciate it if the news had warnings about demonstrations that are going to take place so that I can avoid them when I come home. I am thankful for a nun friend who warned me about last Saturday’s bash in.

These groups are getting more violent, venomous, vengeful, virulent, vindictive, vitriolic, vile and vituperative! I hear a lot of denigration towards our Portland Police. Their hands are tied. Mayor Wheeler has told them to stand down, in other words not to do their jobs. This spring many in the dept either retired or quit and went to other law agencies. Our neighboring counties (Clackamas, Washintgon) refuse to send help in fear that it would endanger their Officers. Portland Police Dept is down 130 officers because of retirements and resignations no one wants to join. There were only two new recruits that were added on this spring. I wonder about the police chief Daniele Outlaw. Does her name fit? The police force is stretched so thin that it was in the news that the police are not going to respond to calls. Where does that leave us? No guns, no police protection.