TDC Note – But HAARP and chemtrails are just “theories” that only basement dwelling nut-jobs believe and report.

China is launching the world’s largest weather-control machine, with the ability to modify the weather in an area similar to the size of Alaska. China has never shied away from doing things on a massive scale and this is yet another example of the Chinese government working on an unprecedented scale.

China’s state-owned Aerospace Science and Technology Corporation is implementing a plan to send thousands of rain-inducing machines across the Tibetan Plateau to increase rainfall along the region.

The Tibetan Plateau is the source of much of China’s water, running down from the mountainous highlands via the massive Yangtze, Mekong, and Yellow rivers. These rivers, which originate on the Tibetan Plateau, are fed by glacial and snow meltwater and drain down into the fertile Chinese farmlands. 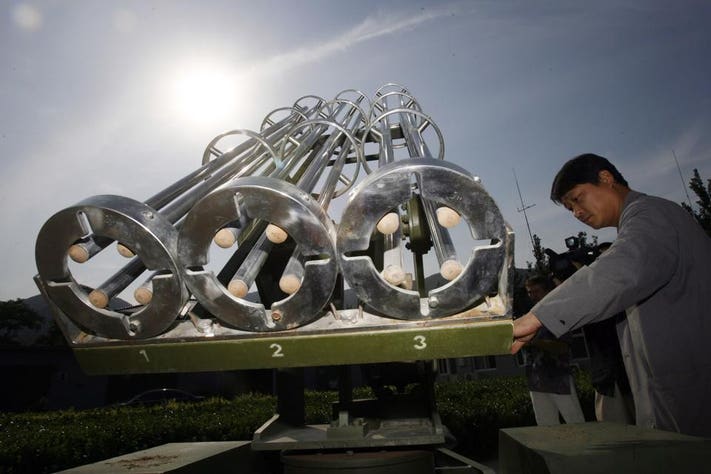 A rocket launcher used to seed clouds to induce rain is seen at a station of the Beijing Meteorological Bureau in Beijing, China, Thursday, July 19, 2007. Beijing regularly uses cloud-seeding techniques to improve the local weather conditions and the bureau has been tasked to ensure optimum weather conditions for the 2008 Olympic Games. (AP Photo/Ng Han Guan)

The practice of artificially inducing rainfall in China is not new, the country manipulated the weather over Beijing just before and during the 2008 Beijing Olympics to ensure a rain-free event. The practice has only grown in scale as part of the Sky River Project aimed at increasing China’s water resources for its billions of people.