Cabal Freaking Out Because of Trump – Wayne Jett

Legal and financial expert Wayne Jett says, “No one in history has ever stood up to the secret cabal running America the way President Trump has.” Signs abound in the mainstream media they are freaking out.   Jett says, “They are freaking out because the noose is slipping over the heads of some of them in terms of the prospects of their being tried for treason or for some other heinous crime. There are many of them. The network, I am sorry to say, goes far and deep throughout our society. . . . Many of them are doing all they can to make sure this comes to an end as soon as possible. We have a President who is actually a declared enemy of the forces that have put our Presidents in office or killed them generation after generation well back into the 19th century.”

Jett calls this a “fight to the death” between team Trump and the cabal. Jett says, “This is a death match no question about it, and I am encouraged. Compared to today and where we were in 2012 and 2016. . . . I had considerable confidence that President Trump was going to prevail. I didn’t care what the polls said. . . . There are too just too many indications that our press lies to us in whatever ways are necessary to support the ruling elite because they, in fact, are instruments of the ruling elite. . . . I can’t see how you could have a worse candidate than Hillary Clinton, but Joe Biden may be it. . . . I am optimistic.” 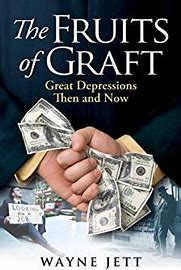 There is free information and original articles written by Wayne Jett on ClassicalCapital.com.

To get a copy of his 550 page book called “The Fruits of Graft,”click here.

Greg is the producer and creator of Greg Hunter’s USAWatchdog.com. The site’s slogan is “analyzing the news to give you a clear picture of what’s really going on.” The site will keep an eye on the government, your financial interests and cut through the media spin. Greg Hunter’s USAWatchdog.com is neither Democrat nor Republican, Liberal or Conservative. Before creating and producing the site, Greg spent nearly 9 years as a network and investigative correspondent. He worked for ABC News and Good Morning America for nearly 6 years. Most recently, Greg worked for CNN for shows such as Paula Zahn Now, American Morning and various CNN business shows.