Iran finally discovers the key to U.S. hegemony and calls for the world to eliminate use of the dollar

Iran finally discovers the key to U.S. hegemony and calls for the world to eliminate use of the dollar by Ken Schortgen Jr for Shotgun Economics

Terrorism can come in many forms, but undoubtedly the most powerful one is economic. And that is because where a simple attack from extremists on a people, property, or symbol might be fleeting and even cause populations to rise up in retaliation, financial terrorism as in the form of economic sanctions can be very lasting.

Back in 2006, the UN imposed economic sanctions against the nation of Iran in regards to their alleged nuclear program, and these sanctions would last only 10 years thanks in part to a highly controversial deal known as the JCPOA. However with the election of Donald Trump as President, that ‘deal’ was scuttled on the U.S. side and Washington once again began the process of ever increasing sanctions in order to try to force Iran to capitulate to what most would call ‘spurious’ demands.

Interestingly, Iran never quite called what the UN did to them economic terrorism because their sanctions were directed at a clear issue tied to Tehran’s nuclear program. However on June 9, Iran’s Foreign Minister publicly has now officially called out the U.S. as a agent of terrorism for the economic sanctions they have imposed upon them via the Trump Administration. 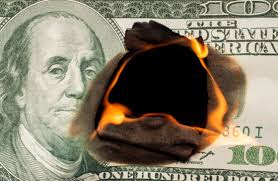 “It amounts, by definition, to economic terrorism because the United States is putting pressure in terms of what its president calls warfare on normal ordinary Iranians in order to change the policies of their government”, he told reporters on the side-lines of the event. – Sputnik News

And in an attempt to fight this ‘terrorism’, the Foreign Minister specifically called out America’s control over the global reserve currency as the foundation for their rogue actions, and is calling on the rest of the world to join him in rejecting the dollar and dollar hegemony.

“America’s power rests on the dollar; a great part of America’s economic power will go away if countries eliminate the dollar from their economic systems”, the minister said.

Fortunately for Iran, and perhaps not so fortunate for the U.S. is the fact that de-dollarization is an ongoing reality that began to really take shape around the end of 2013.  But like with any empire that stands on the cusp of disintegration, the world will experience much more chaos and turmoil before a paradigm shift occurs just as it did for nearly empires of the past.