The world media, except in the U.S., are awash with the depressing, deplorable, and disturbing revelations about Martin Luther King, Jr. David J. Garrow, King’s very friendly and very liberal official biographer, revealed up to 45 sexual encounters by King and the observation of and encouragement by King of the rape of a church member by her pastor! All supported by FBI surveillance tapes.

One FBI memo reported, “King maintains intimate relationships with at least three women, one in Atlanta, one in Mt Vernon, New York, and one in Washington, DC,” making him very susceptible to blackmail. He also had a long time mistress in Los Angeles, wife of a dentist, in addition to his many one night stands. It goes on and on. In 2010, Kentucky State Senator Georgia Davis Powers recounted her intimate relationship with King in her book, I Shared the Dream.

Garrow also reported about King’s “love child” with a girlfriend in Los Angeles and King “continued to support this child” and called the mother every Wednesday.

When Coretta King complained about her husband’s affairs, he told her she “should go out and have some sexual affairs of her own.” According to one of my contacts, Coretta got fed up and went after Martin with a butcher’s knife. He wrote me saying, “I am from Atlanta, and my grandmother’s neighbor was head of nursing at St. Joseph’s Hospital [now Emory St. Josephs]. One morning she told my grandmother that they had brought MLK into the emergency room the night before because ‘Coretta caught him with another woman and cut him up with a butcher’s knife.’ ”

But evidently, Martin didn’t get her point and continued to fornicate.

Standpoint, where the original article appeared, reported, “he preferred to perform unnatural acts on women and that he had started the ‘International Association for the Advancement of P**** Eaters.’” Such an evil mind and mouth makes me ashamed of his being a Baptist.

The FBI doesn’t usually show any interest in the sexual proclivities of citizens but when a person of interest gets in bed with Communists, U.S. officials show an interest. This was especially true while we were in the middle of the Cold War with the Soviet Union. The FBI got interested in King’s activities because many of his associates were members of the Communist Party USA.

King admitted to being a Marxist to Communist bag man Stanley D. Levison, a white man, who served as his speech writer, ghost writer, and tax preparer. Levison, in addition to bankrolling the Communist Party in America, also gave King $10,000 in two years which is equivalent to $87,000 in today’s money. Levison gave the Communist Party $76,500 equivalent to $650,000 in today’s money. Remember that Levison worked for King while working for the Soviet KGB secret police! 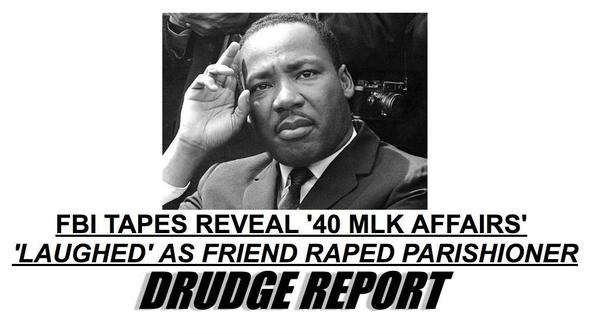 In my eBook Martin Luther King, Jr.: Judged by His Character Not His Color!, I deal with King’s wild sex parties, his perversion, his drunkenness, his plagiarism, his many sexual exploits including his perversion and his admission of being a Marxist. All documented by his “best friend” Ralph Abernathy, FBI files, etc. My book highlights the person, the preacher, the politician, the party, the plagiarist, the prevaricator, and the philanderer.

Garrow, a liberal, Pulitzer Prize-winning author and official biographer of Martin Luther King, Jr., dropped the literary bomb on the world a few weeks ago, and it is still reverberating around the globe except in America! His article “The Troubling Legacy of Martin Luther King” was rejected by the Guardian, Washington Post, The Atlantic, and the Atlanta Journal-Constitution. The story from a highly recognized author was too hot to handle. It still is since none of the media moguls in the U.S. have reported the story!

What happened to the fearless reporters who try to be “fair and balanced”? What about “all the news that’s fit to print”?