We Warned You When They First Came For Alex Jones

In August 2018, ANP headlined a piece with “First They Came For Infowars……. Tomorrow We Will All Be Alex Jones: Independent Media Silenced – They Are Coming For Us All Now.” In that article we described how social media and big tech platforms had colluded to deplatform Alex Jones, canceling his shows, refusing him service, and wiping his presence, other than his website, off the Internet.

We and many others warned other Independent Media that everyone should be standing up for Infowars whether they liked Alex Jones or not and whether they agreed with his opinions or not, because that type of overt, coordinated censorship by silencing voices simply because they have dissenting views, is dangerous and the liberal outrage mob would eventually come for us all.

Some saw the writing on the wall and spoke up, not so much in favor of Alex Jones or Infowars, but against the censorship of opinions that don’t meet the liberal group-think, others refused to stand up and speak out because they simply didn’t like Jones, his style or his opinions, so to them, it was no big deal. 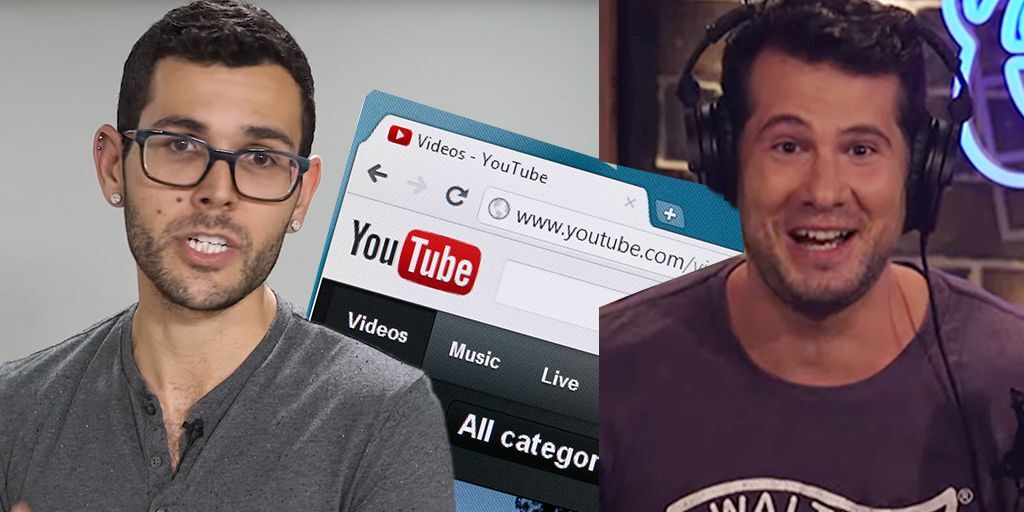 (Left: Vox’s Carlos Maza – Right: Conservative Comedian Steven Crowder)
#VOX ADPOCALYPSE EXPLAINEDLess than a year later, Google’s video platform YouTube is in the midst of a widespread purge of conservative voices, by demonetization, and removing millions of videos from Independent creators. The purge is being called the #Voxadpocalypse.

Vox Media personality Carlos Maza took to Twitter to complain to YouTube about Conservative comedian Steven Crowder making fun of Maza, referring to him as an “angry little queer,” a “gay Mexican,” and “Mr. Lispy queer from Vox.” All of which is accurate, as Maza is the typical angry liberal and a self-admitted homosexual who speaks with a lisp.

At first YouTube refused to take action against Crowder admitting he violated none of their policies, then Vox Media, along with other liberal media threw everything they had at YouTube, with Maza whining relentlessly on Twitter, until YouTube caved to the liberal online media mob and demonetized Crowder’s channel.

A little about Maza, via Fox News:

Maza, an openly gay partisan activist, has himself previously used aggressive language on social media. “Milkshake them all,” he wrote May 21, referring to right-wing activists. “Humiliate them at every turn. Make them dread public organizing.”

Maza has also referred to someone as having a “jew face.”

Maza still wasn’t happy and continued to harass YouTube as shown over at Twitchy, and from there everything went to hell in a hand-basket when YouTube started mass demonetizing other channels for “wrong-think” and conservative option, as well as mass deleting videos, and along with those people were others, some not even political in nature but simply providing historical documentaries.

More from Fox on that:

But even the changes YouTube made on Wednesday apparently had not gone according to plan. Several other YouTube content creators, including Jesse Lee Peterson, the educational resource “Mr. Allsop History,” and journalist and filmmaker Ford Fischer, said they had been erroneously caught up in the situation.

“YouTube demonetized my channel right after taking down videos *condemning* anti-Jewish hatred by whites & Muslims!” Peterson wrote. “I always tell people to stop hating & blaming. @YouTubeTeam, you made an error. Do the right thing & reinstate my channel privileges/features immediately.”

Added Fischer: “Within minutes of @YouTube’s announcement of a new purge it appears they caught my outlet, which documents activism and extremism, in the crossfire. I was just notified my entire channel has been demonetized. I am a journalist whose work there is used in dozens of documentaries.”

The Daily Wire’s Elisha Krauss alleged her content had also lost monetization. “Y’all should head on over to @YouTube and watch my @prageru before it’s deemed insulting. They already have it on restricted mode and limit monetization for it because heaven forbid ppl Google European abortion laws and find the truth!”

Conservative commentators pointed to the episode as a consequence of unnecessary, corporate cowardice, and hypocrisy. YouTube, in the past, has cut monetization for videos deemed unsuitable for advertising, including videos about sensitive topics like suicide.

Those named above are not even the tip of the iceberg, as shown below from another content creator who got caught up in the demonetizing and deletion of videos by YouTube. At around the 3:30 minute mark, Vincent James from The Red Elephant channel provides a long, partial list of video creators that have been penalized, but have not violated any of YouTube’s policies.