TDC Note – The recent Contributor Roundtable at The Gadfly is close to two hours of discussion with Jim Willie, London Paul, Ken Schortgen Jr and Rory Hall for your up to the minute analysis of all that’s important to you – All at The Gadfly – one week FREE TRIAL and I can assure you, you will want to stay! Supporting The Gadfly you support The Daily Coin

Nan Madol is the only ancient city ever built upon a coral reef.  It is comprised of a set of almost 100 stone and coral filled platforms atop artificial islands separated by narrow channels and enclosed by an outer seawall. Nan Madol includes the remains of stone palaces, temples, tombs and residential domains.

Despite the enormity of the undertaking in building the city, no records exist regarding when exactly it was built, where the enormous rocks came from, how they were transported there, and for what reason Nan Madol was constructed on top of a reef .

UNESCO has finally paid attention to the immense historical significance of Nan Madol, a mysterious ancient coral reef city off the island of Pohnpei in Micronesia, by placing it on the World Heritage List. Describing it as a “globally significant masterpiece of creative genius”, Nan Madol is an engineering marvel, but it has not yet given up all its secrets. 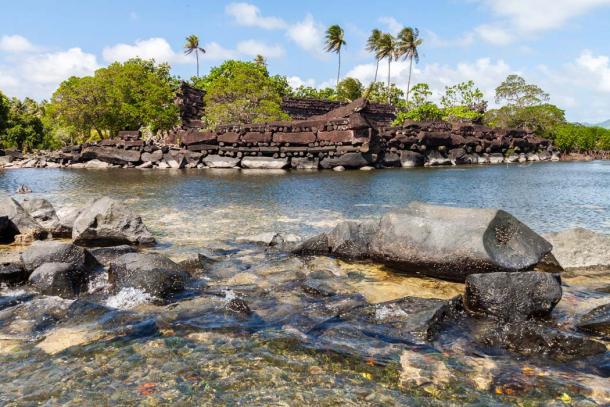 The ancient city of Nan Madol was built atop a coral reef. ( Dmitry / Adobe )

Evidence of the early human activity on the islands dates back to the first or second century BC, but it is not known exactly when the construction of the artificial islets started. Theories range from the 5th to the 11th century AD, when it was purportedly built as a ritual and ceremonial center for the ruling chiefs of the Saudeleur Dynasty. UNESCO dates the site at 1200 to 1500 AD.

However, uranium dating techniques completed in 2016 suggest it was built sometime between 1180 and 1200. This date means it is the oldest known monumental scaled burial site on the remote islands of the Pacific.

The Saudeleur dynasty was the first organized government uniting the people of Pohnpei island, ruling from around 1100 to around 1628 AD. However, this era was preceded by the Mwehin Kawa (“period of building”) and Mwehin Aramas (“period of peopling”).

Nan Madol was Originally the Reef of Heaven

The name Nan Madol means “spaces between” and refers to the canals that crisscross the ruins. However, its traditional name was  Soun Nan-leng  (Reef of Heaven), according to Gene Ashby in his book  Pohnpei, An Island Argosy .

The total area of the enclosure is 75 hectares. The foundations of the islets were constructed of huge basalt boulders , on which walled enclosures were built using columnar basalt in a header and stretcher pattern in-filled with coral rubble. Walls were as high as 15 meters (49.21 ft.) and up to 5 meters (16.40 ft.) thick.

The average weight of each stone is 5 tons, with some weighing as much as 50 tons, and it has been estimated that the total weight of the columnar basalt that makes up the city’s construction is up to 750,000 metric tons.