The Great Unraveling Has Arrived Leading To Devastating Food Shortages

TDC Note – The recent Contributor Roundtable at The Gadfly is close to two hours of discussion with Jim Willie, London Paul, Ken Schortgen Jr and Rory Hall for your up to the minute analysis of all that’s important to you – All at The Gadfly – one week FREE TRIAL and I can assure you, you will want to stay! Supporting The Gadfly you support The Daily Coin

In this new story over at the Wall Street Journal they report that the wettest year on record has swamped America’s ‘Farm Belt‘, with record flooding keeping farmers out of the fields and only 30% of US corn fields planted, leading to what Michael Snyder over at the Economic Collapse Blog recently called “a nightmare that never ends for the agriculture industry“.

While ‘Alexandria Occasional-Cortex‘ recently stirred up controversy over why Americans shouldn’t be planting cauliflower in ‘community gardens‘ in 2019, calling it ‘too colonial‘, as Snyder’s story points out, all of this horrific weather in our nation’s breadbasket will leave US food production substantially below expectations: “This is truly a major national crisis, and it is just getting started.” Why is ‘Cortex‘ concerned about veggies being ‘too colonial‘ when experts warn of food shortages on the horizon? (And, by the way, what are ‘colonial vegetables’? We’ve never heard of such a thing till crazy AOC came around!)

Interestingly, Snyder’s story also points out that all of this has been happening as global weather patterns have continued to go haywire: “What Is Causing Extremely Bizarre Weather Patterns To Hammer The Middle Of The U.S. Over And Over Again?” Snyder asked within the linked story. With 100 years of weather modification patents on file and globalists such as Henry Kissinger suggesting using ‘food as a weapon to induce targeted population reduction‘ in this previously classified 200-page report, how far of a stretch is it to suggest ‘America’s breadbasket‘ might be being targeted?

As then future President Lyndon B. Johnson said during a graduation address to his alma mater Southwest Texas State University in 1962 of a newly deployed satellite, “this lays the foundation for the development of a weather satellite that will permit man to determine the world’s cloud layers and ultimately to control the weather and he who controls the weather, controls the world.” If Johnson was thinking that, in 1962, of our ‘new technologies‘ way back then, does anybody really believe that such programs and technologies weren’t secretly implemented in the 55+ years since?

We’ll take a much longer look below at ‘weather warfare‘ and look over some weather modification patents that are now on file proving that government’s and private corporations have long been working to ‘play God‘ in their attempts to ‘modify the weather‘ using geoengineering. We’ll also look at more quotes from US government officials, including ‘enemy of America within‘ John Brennan who was head of the CIA when he confirmed weather modification programs exist and that some nations would be ‘winners‘ in weather warfare, while others would be ‘losers‘. 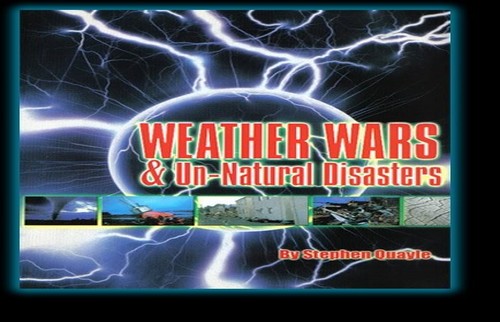 In his must-read book “Weather Wars & Un-Natural Disasters“, Steve Quayle had warned years ago that “technology will make available, to the leaders of the major nations, techniques for conducting secret warfare, of which only a bare minimum of security forces need be appraised… Techniques of weather modification could be employed to produce prolonged periods of drought or storm.”

Although such technologies have long been censored from the masses, we’ve gotten numerous signs over the past several years through mainstream media stories that such technologies do indeed exist and are being used already and all the time.

As Newsweek had reported back in May of 2018 in this story titled “CHINA MAKES IT RAIN WITH A WEATHER CONTROL NETWORK TWICE THE SIZE OF TEXAS”, China’s weather modification system works by seeding clouds with silver iodide particles that trigger them to release moisture.