While President Trump has recently used his social media presence on Twitter and Facebook to highlight the constant bias and censorship of conservative thought on their platforms as they label any ideology and online speech they disagree with as “dangerous,”before banning, blocking, suspending or terminating their accounts, we now see the President is using the official White House Twitter feed to announce that they are now collecting the proof of said censorship.

“The Trump Administration is fighting for free speech online.

No matter your views, if you suspect political bias has caused you to be censored or silenced online, we want to hear about it!

The link brings users to a form at https://whitehouse.typeform.com/to/Jti9QH, which states:

SOCIAL MEDIA PLATFORMS should advance FREEDOM OF SPEECH. Yet too many Americans have seen their accounts suspended, banned, or fraudulently reported for unclear “violations” of user policies.

No matter your views, if you suspect political bias caused such an action to be taken against you, share your story with President Trump.

Below that is a “Start” button. ANP utilized the site to submit our own experience with YouTube when they demonetized our video channel after having had the channel monetized for years without issue, as our first submission to help the Trump administration compile the data which will allow them to 1) Have documented proof, including screenshots of notifications, proof of bias, and proof of these platforms active censorship practices; 2) Give them the statistical data on the percentages of reports that come from conservatives, versus liberals, to prove their is a bias in their actions.

After hitting the start button and providing some personal information, name location, phone number (all of which can be bypassed by clicking the down arrow at the bottom right-side of the webpage for those that might not want to put there phone number in for example), before taking you to the section that says “Thanks for sharing that information! Now, let’s talk about what happened on social media,” with a “continue” button below. 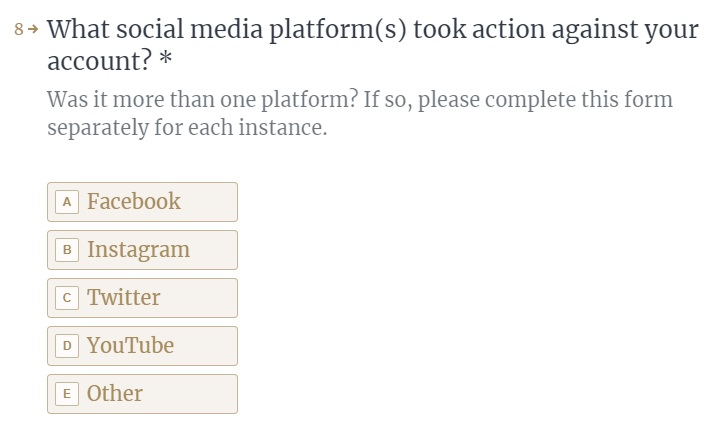 Note – We found this particularly interesting because it shows that the White House is open to learning about more than just social media censorship of conservatives, but is also compiling evidence of censorship by YouTube, owned by Google’s Alphabet, and offers the “other” option. That is  important, as by using the “other” option, website owners like ourselves can then take screen shots to submit showing Google Adsense earnings, from two years before the 2016 Presidential election, then submitting a separate screen shot of the revenue generated for the two years after the election, proving, by using their own data, that Google severely (down by more than three-fourths) penalized conservative websites financially for supporting the candidate Google itself opposed.

After offering detailed information describing the censorship, the form allows users to upload screen shots or documents that prove their assertions.

It is an easy and quick form to fill out and submit, and we at ANP encourage anyone that has suffered from big tech and social media censorship, to document each and every instance, and submit it to the White House.

This is a shot across the bow from the Trump administration against socilal media giants and big tech, not just “threatening” that the administration is “watching,” as the President has done before, but now telling them and showing them that the White House is actively compiling data to prove these entities are censoring users, which in turn interferes in elections by silencing one political party.

RECENT CENSORSHIP OF CONSERVATIVES UNDERSCORE THE IMPORTANCE OF THE WH INITIATIVE

Just today over at News Wars, Paul Joseph Watson shows that Facebook has slapped a 30 day ban on a conservative user for flashing an “OK” hand sign, while wearing a green hat that said “Make Frogs Straight Again.”  Liberals now laughably claim the “OK” hand sign, which many of have used since we were children, is now some type of “symbol” of white supremacy, so social media censors over at FB are now banning people for using them.