Since the latest the crisis in 2008/2009, central banks around the world have been doing their best to expel risks from financial markets. By lowering interest rates, fixing them at extremely low levels, or issuing more credit and money, monetary policymakers make sure that ailing borrowers are kept afloat. In fact, central banks have put a “safety net” under the economies and the financial markets in particular. As it seems, this measure has been working quite effectively over the last ten years or so.

Investors do no longer fear that big borrowers – be it big governments or big banks and big corporates – could default, as evidenced by the low credit spread environment. Liquidity in basically all important credit market segments is high, and borrowers experience no trouble rolling over their maturing debt. What is more, stock market valuations have continued to increase, significantly propped up by central banks’ easy monetary policy. For low interest rates help drive stock prices and their valuation levels up. 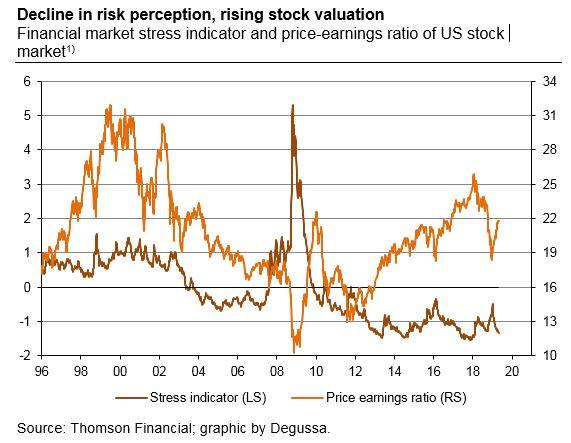 As a measure of risk perception, figure 1 shows a “financial market stress indicator”, together with the price-earnings ratio of the US stock market. From eyeballing the series, one can easily see that, since around 2009, the PE ratio has been rising considerably, while risk perception, as measured by the financial market stress indicator, has gone down substantially and has been hovering at relatively low levels since around the middle of 2014. The message of the chart is, therefore: Risk down, stock valuations up.

Of course, there is nothing wrong with this development per se, were it not for the fact that the decline in risk perception does not come naturally, but has been orchestrated by central banks’ many interventions in the credit and financial system. In particular, by artificially lowering market interest rates, central banks have triggered a “boom”, which produces pretty-to-look-at official data (on GDP, investment, employment, and such), but which is, and unfortunately so, built on quicksand.

The boom will only continue if and when market interest rates remain at suppressed levels, or are lowered even further. For if interest rates were to rise, various investments would turn out to be unprofitable; loans would default; banks would run up losses and rein in their credit supply; unemployment would rise; and so on. In other words: Higher interest rates would turn the boom into bust, for they would actually collapse the production and employment structure that has been nurtured by a policy of extremely low interest rates.

This is why central banks are most likely to continue with their “crusade against risk.” That is, they will very likely keep their interest rates at current low levels for a very long time or will, where it is still possible, lower them even further. For how long can this go on? Presumably no one knows for sure. At least on a scientific basis it is impossible to forecast when the crisis will hit, when the current boom will turn into bust. It might be a bitter pill to swallow, but it goes well beyond the science of economics to make any such predictions.