Monsanto was acquired last June by Bayer, a chemical corporation whose chairperson was found guilty of crimes against humanity during the post-Nazi-era Nuremberg trials. Bayer was complicit in the chemical experimentation on Jews and the carrying out of the Holocaust, it turns out.

In the decades that followed, Bayer (formerly IG Farben) found a way to turn its deadly chemical weapons into pesticides, herbicides, chemotherapy drugs and pharmaceuticals. Instead of murdering people for the Third Reich, the corporation found a way to murder people for profit. Its acquisition of Monsanto cemented Bayer’s dominance in the agriculture sector, allowing the company to earn tens of billions of dollars a year by poisoning the global food supply with a deadly, cancer-causing chemical known as glyphosate — sold as “Roundup” under the Monsanto brand name.

Now, a third court case has ruled that Monsanto’s toxic weed killer caused cancer among those who used it. In this case, a California jury has returned an astonishing $2 billion award for the plaintiffs who say Roundup caused their cancers. “Bayer AG was ordered to pay more than $2 billion in damages to a California couple that claimed they got cancer as a result of using its Roundup weedkiller for about three decades,” reports Bloomberg.com.

It’s one of the largest jury awards ever recorded in the history of humanity, and it shows that Bayer is now facing “financial annihilation” because there are over 13,000 additional lawsuits pending.

If 10,000 lawsuits each result in a jury award of just $100 million — the low side of awards so far — this would cost Bayer $1 trillion, plunging the evil corporation into financial ruin.

Just as Roundup is toxic to humanity, Monsanto has been toxic for Bayer

Since acquiring Monsanto, Bayer’s share price has plunged more than 40 percent, meaning the chemical giant has already lost tens of billions of dollars in market capitalization. Since Bayer inherited all of Monsanto’s liabilities when it acquired the company — and because Roundup has been in use by the public for over three decades — Bayer could face at least another decade of lawsuits that add up to multiple trillions of dollars in damages. 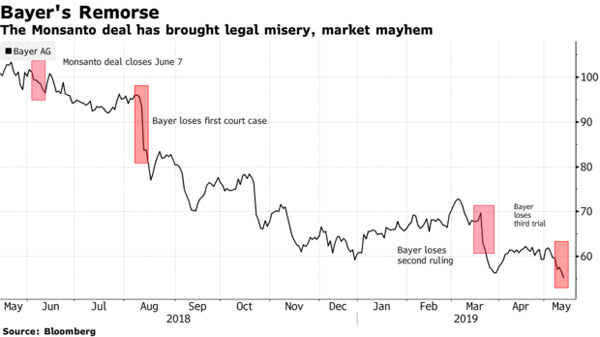 “The company has got to come to the table with a viable plan to resolve these cases, or the losses are going to mount,” attorney Micah Dortch told Bloomberg.com. Dortch is part of a law firm that has filed many cases against Monsanto / Bayer, claiming damage from glyphosate exposure. “This outcome should make Monsanto realize the seriousness of these claims and how a jury perceives the evidence.”

Ironically, Monsanto isn’t just toxic to the human food supply and the environment at large; it’s also toxic to Bayer’s shareholders. Then again, if they’re invested in evil corporations, they probably deserve to lose their investments anyway.

On top of the stunning court decision mentioned above, French authorities look likely to file criminal charges against Monsanto for running a “black ops” campaign across Europe, which targeted regulators, lawmakers and journalists with either bribes or intimidation / character assassination campaigns, depending on whether they supported or opposed Roundup and GMOs.

“French prosecutors said on Friday they had opened an inquiry after newspaper Le Monde filed a complaint alleging that Monsanto … had kept a file of 200 names, including journalists and lawmakers in hopes of influencing positions on pesticides,” reports Reuters. (Yes, Reuters.)

Bayer officials are now admitting that Monsanto used black ops-like units to discredit, smear and destroy individuals who stood in the way of Monsanto’s market dominance across Europe. “There have been a number of cases where – as they would say in football – not the ball was played but the man, or woman, was tackled,” admitted Matthias Berninger, the head of public affairs and sustainability for Bayer, as reported by Reuters.

This is an open admission about Monsanto’s character assassination and online defamation operations that have been running for at least a decade.

Natural News has long reported that Monsanto spends millions of dollars a year running “black ops” units to carry out online character assassination targeting clean food advocates in the United States and around the world. This author has been the target of numerous black ops campaigns that I believe were funded and organized by Monsanto, including stalking, death threat campaigns, character assassination and the coordinated bribery of left-learning journalists to publish fabricated lies in media outlets which are picked up by paid-off Wikipedia editors to smear Natural News in Wikipedia.

Monsanto is an expert in the so-called “Wikipedia shuffle” scheme, which plants character assassination lies in your Wikipedia page that are then picked up by paid-off journalists in a fake news rag like Buzzfeed. Citing the fake Wikipedia entry, Buzzfeed publishes a story that repeats the defamation lie. From there, the original Wikipedia smear is deleted and replaced with a new entry that cites the Buzzfeed story, which is of course accepted as an “authoritative source” by Wikipedia. Now the lie is sourced and thus considered a “fact.” This is how the Wikipedia shuffle works, and it’s a technique that has been used thousands of times by Monsanto to smear clean food advocates and anti-Monsanto critics all across the world.

Years ago, Natural News exposed Jon Entine, one of the many character assassination operatives with ties to the American Enterprise Institute. Jon Entine ran defamation and smear campaigns targeting critics of Monsanto, and he helped organize attacks on scientific journals that published research showing the toxicity of glyphosate.

French public-sector research institutes Inra and CNRS on Monday said they would file criminal complaints over mishandling of personal data, after finding that some of their researchers and executives featured on the Monsanto stakeholder lists.

This means the jig is just about up for Monsanto and Bayer. With Monsanto’s “black ops” crimes being exposed, and with Bayer now facing literally trillions of dollars in potential liability while suffering a catastrophic stock market loss, this deadly corporation whose products have murdered millions of people across our globe may finally be facing the karma it has long deserved.

Humanity must tear down Bayer and Monsanto in self-defense, halting the “poison-for-profit” scheme that has killed tens of millions

Humanity must continue to work to utterly dismantle Monsanto and Bayer, putting them out of business for good. Until that day comes, this evil cabal of insidious poisoners will continue to saturate the human food supply with cancer-causing chemicals while polluting the world’s croplands and waterways with deadly chemicals.

Bayer has been at war with humanity for over half a century, and Monsanto developed the chemical weapons that have killed millions (including Agent Orange, used in Vietnam). It’s time for humanity to commence a new round of arrests and trials that hold these corporations responsible for their crimes against humanity and nature.

Keep filing the lawsuits against Monsanto, and keep exposing the truth about Bayer’s history with the Nazis and the Holocaust. Here are some very important content links that you can share: