As FEMA & NASA Carry Out ‘Dress Rehearsal For Doomsday’

As FEMA & NASA Carry Out ‘Dress Rehearsal For Doomsday’, The ‘Lord Of Chaos’ Asteroid ‘Apophis’ Heads Towards Earth: Are Govt Agencies Preparing For An Extinction Level Event In The Near Future? By Stefan Stanford – All News Pipeline

Why the quick lesson in ancient Egyptian mythology you might ask? As Newsweek reports in this April 30th story titled “God of Chaos Asteroid Apophis Is Headed For Earth – And NASA Is Excited“, on Friday, April 13th of the year 2029, yes, almost 10 years away still, a 1,110-foot-wide asteroid known as 99942 Apophis will speed past our planet at an estimated distance of around 19,000 miles, potentially coming closer to the surface than some orbiting spacecraft.

Thrilling NASA and scientists already in 2019 because very rarely do asteroids of that size come that close to the Earth, the Newsweek story was just one of several that came out all at once with these stories over at the Epoch Times titled “NASA Head Says A Major Asteorid Could Crash Into Earth In The Future“ and this one by Mac Slavo titled “NASA Prepares For ‘Asteroid Apocalypse’ With ‘Planetary Defense’ Simulation“ sounding almost like science fiction movies.

Yet as has long been warned, what has happened before can surely happen again though as this new story over at Justus Knight Newswhich Steve Quayle had linked to on his website on Wednesday asks, is this all mass deception? We have embedded Justus’s full video as the final video at the bottom of this story, a story within which we’re going to take a look at the sudden mass influx of ‘asteroiddoom‘ stories all across the internet the last few days and why this all may be happening now. 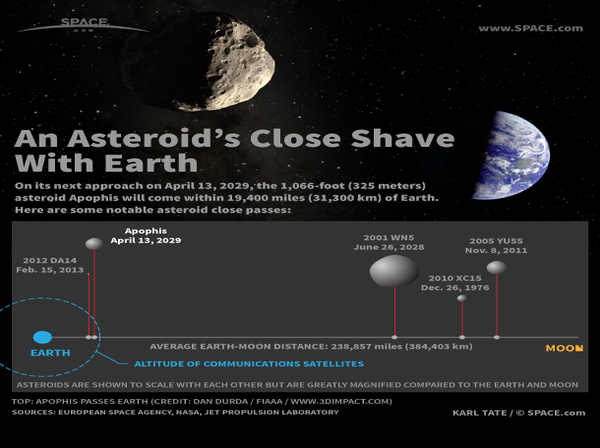 As Mac Slavo had reported in this April 29th story at SHTFPlan, FEMA recently joined NASA in a ‘dress rehearsal for doomsday‘, carrying out an ‘asteroid apocalypse simulation‘ to help the agencies prepare for the ‘dreaded event‘. From Slavo’s story.:

NASA is going to be using a simulation of an “asteroid apocalypse” in order to help the space agency prepare for the cataclysmic event. And they are taking it seriously, as disaster planners from FEMA will join NASA for a dress rehearsal of doomsday.

International partners, including the European Space Agency (ESA), will also be a part of the simulation. The drill is said to be a “tabletop exercise” that will simulate just how a planetary asteroid emergency would play out in real time. Although an emergency on this scale has never happened, and factors such as the location of impact will have a massive effect on the response to such a globally catastrophic event.

According to the Metro UK, disaster planners from Federal Emergency Management Agency (FEMA) will join with NASA to hold a “make-believe apocalypse” intended to “inform involved players of important aspects of a possible disaster and identify issues for accomplishing a successful response.” The scenario will begin with the fictional premise that on March 26, astronomers “discovered” a near-Earth object (a comet or asteroid which comes within 30 million miles of Earth and one they consider potentially hazardous to Earth), NASA wrote.

And as this story over at Epoch Times reports, an event such as a killer asteroid crashing into the Earth could very well happen in our lifetime’s. And while nobody should lose any sleep over something that is out of all of our control, the threat of asteroid’s is real nonetheless so it’s good seeing somebody doing something to prepare. Check out the wording.:

The head of the National Aeronautics and Space Administration (NASA) said that a major asteroid could crash into the Earth in our lifetime.

Jim Bridenstine, the agency’s administrator, said during a keynote speech at the International Academy of Astronautics’ 2019 Planetary Defense Conference in College Park, Maryland that the threat of asteroids is real.

“We have to make sure that people understand that this is not about Hollywood, it’s not about movies,” Bridenstine said on April 29, reported Space.com. “This is about ultimately protecting the only planet we know right now to host life, and that is the planet Earth.”