The Reality of the Great Replacement: Jean-Yves Le Gallou

The Reality of the Great Replacement: Jean-Yves Le Gallou by GUILLAUME DUROCHER for UNZ Review

The following is a translation of the summary of Jean-Yves Le Gallou’s speech at the third Fête du Pays Réel (Festival of the Real Country), held on March 30. This is a useful summary both of some of the dubious claims of the French mainstream media on immigration and of the known facts.

If disinformation is extremely widespread, immigration is surely the area in which it is strongest, notably on the question of the great replacement. On this point, the mainstream media make mutually contradictory claims, because they assert both that the great replacement does not exist . . . and that it is not intentional!

I. “The great replacement doesn’t exist”

To discredit those who assert the existence of the great replacement, the media again use contradictory arguments because they claim on the one hand that France has always been a land of immigration but, on the other hand, that the structure of the population has not fundamentally changed.

1.a “France has always been a land of immigration”

As shown by a monumental study[1] edited by Dupâquier,[2] this is a falsehood. In fact, for 5000 years, the French population, stemming from an Indo-European settlement, has changed very little: a few percentages over several centuries. The bulk of these migratory movements took place within the European continent, including what has been called “the great invasions.”[3]

It is true that at the end of the nineteenth and at the beginning of the twentieth centuries, France experienced migratory phenomena, but this largely concerned Catholic populations coming from Poland, Italy, Spain, or Portugal. This remained the case up to the 1960s.

1.b “The immigrant population is stable” 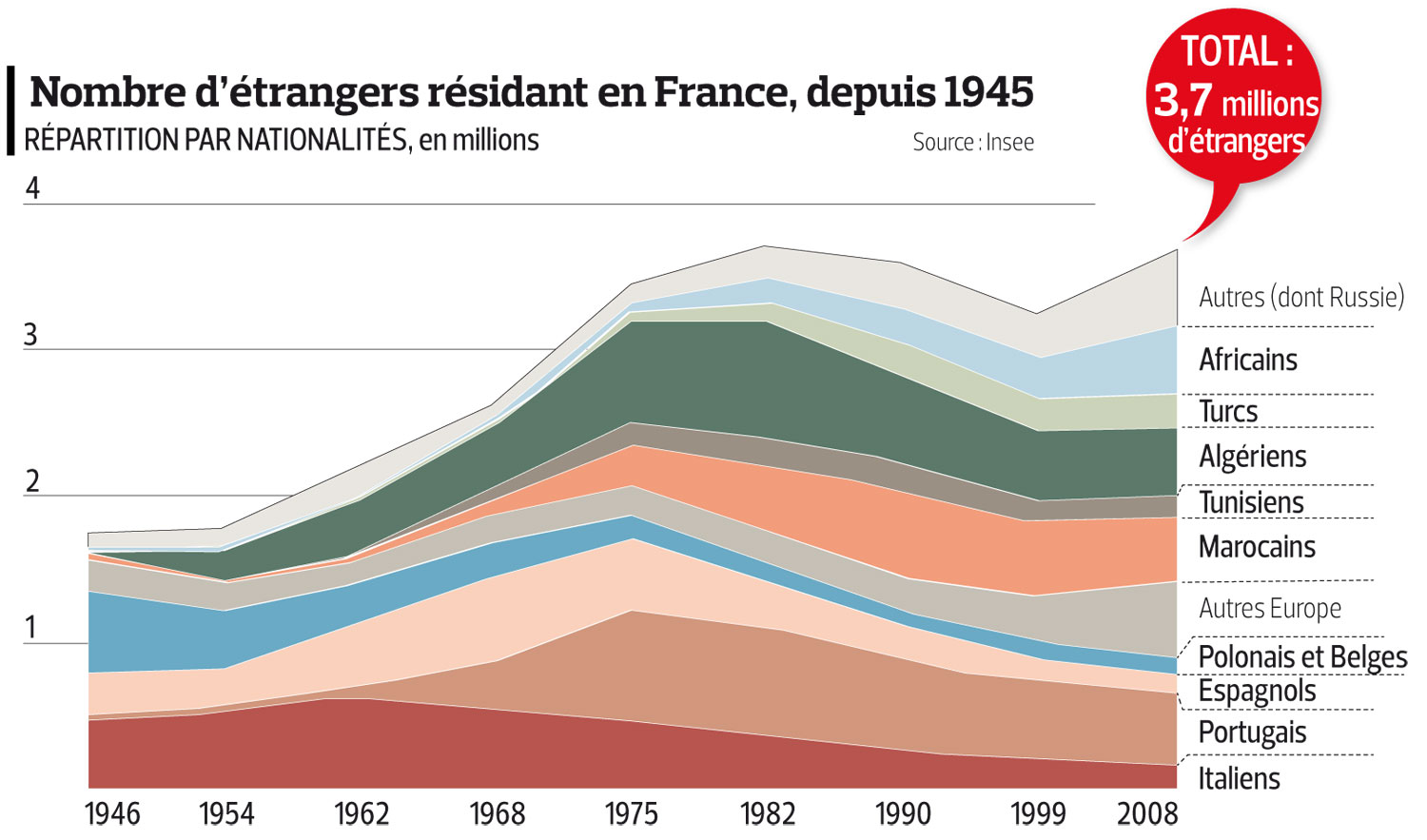 Translator’s note: Mainstream politco-media institutions like to use charts to show that the legally foreign population in France has been “stable” since the 1960s and therefore, they sophistically add, no population change is occurring.

Even according to official statistics, this is false. In 1911, the foreign population represented 3% of the total, as against 5 or 6% today. This development could seem insignificant but, in reality, this number – the stability of which over the past decades immigrationists like to emphasize – hides a quite different reality. Every time that 100,000 or 150,000 foreigners arrive on French soil, just as many are naturalized.

As such, although the administrative reality does not change (the proportion of foreigners), there is another reality which changes considerably: cultural, political, sentimental, and civilizational reality. Today the term “French” has lost much of its content, because one can have French nationality without having the slightest attachment to France, and in any case without participating in its civilization.

One can estimate the share of the population not originally from France or Europe at 20%, a number confirmed by several sources. Thus the CSA[4] has criticized the media for having TV shows with only 18.5% “diversity,” proof that they consider that its demographic weight is much higher!