Lesson Learned: Russia Is Now Doing in Venezuela What It Failed to Do in Yugoslavia, Syria

Lesson Learned: Russia Is Now Doing in Venezuela What It Failed to Do in Yugoslavia, Syria by Marko Marjanović for Russia-Insider

Pushing for the US to start an air war against Syria in 2012 Hillary Clinton argued in her emails that Russia would not “stand in the way”, just as it had done “little more than complain” when the US and its satellites bombed Yugoslavia in 1999:

The second step is to develop international support for a coalition air operation.

Russia will never support such a mission, so there is no point operating through the UN Security Council.

Some argue that U.S. involvement risks a wider war with Russia. But the Kosovo example shows otherwise.

In that case, Russia had genuine ethnic and political ties to the Serbs, which don’t exist between Russia and Syria, and even then Russia did little more than complain.

Russian officials have already acknowledged they won’t stand in the way if intervention comes.

What Hillary failed to appreciate was that Putin was not Yeltsin, that comeback Putin who had returned to the presidency after a Medvedev abstention at the UN allowed the Empire to unleash an air war against Libya in particular was not Yeltsin, and also that even Yeltsin had done quite a bit more than just “complain” in 1999.

As the NATO-Yugoslavia war was concluding Yeltsin ordered the 300 Russian peacekeepers in Bosnia to make a dash to the Priština airport in Kosovo and occupy it before NATO troops moved in from the south which they did. Wesley Clark then ordered the British general Mike Jackson, and the only reason we do not remember 1999 as the biggest clash of Russian and NATO arms ever is because Jackson refused to carry out the order. Yeltsin then, realizing flying in reinforcements over pro-NATO countries would be near impossible, relented and conceded the airport anyway.

So yeah, in fact Russia did a lot more than merely “complain” in 1999. It attempted a disorganized and ill-conceived, but sincere last-minute move to secure a Russian occupation zone in Kosovo for the Serbs’ sake. It came up short, but that is distinct from not making an attempt at all.

As we know Russia did a lot more than just complain again in Syria. Contrary to Clinton’s expectations of three years before Russia in 2015 entered the war in Syria. I am the opinion that what made Russia’s intervention possible for Moscow was America’s own intervention against ISIS which started the year before. Since 2011 the CIA had been backing the Islamist rebellion against the Syrian government. But following the ISIS-rebel split of late 2013 and the rapid ISIS expansion into western Iraq in early 2014, America’s Pentagon entered the war against ISIS, first in Iraq and a few months later also to a lesser extent in Syria. 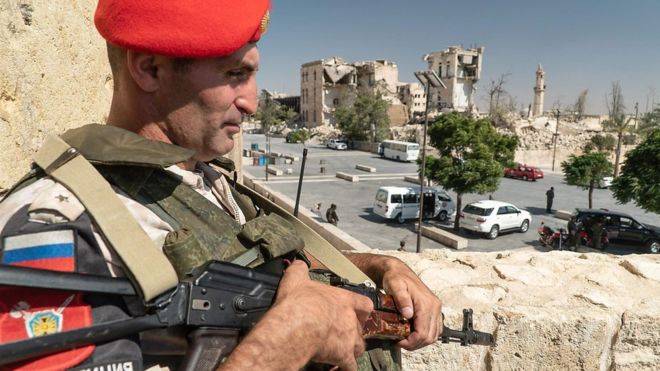 This allowed the Russians to present their intervention to themselves, to the world, and to the Americans as not being directly opposed to American goals, which indeed it was not. The Russian military, Moscow could point out, was there to do what America’s own military was doing, namely to fight ISIS, albeit the Russians would be more thorough and would also fight al-Qaeda and its allies. Instead of the Russian intervention being directly opposed to the American intervention it was — because there were in fact two separate US interventions working at cross purposes — instead at a 90 degree angle from what the US was doing.

In fact I think Moscow went into Syria as much to frustrate US regime-change plans as to force the US to engage and deal with it, and acknowledge Russia, no matter how resentfully as a partner in some limited respect. A strategy which showed some promise initially as Russia created some good will internationally by fighting ISIS as the latter hit Paris, and then again when Lavrov and Kerry in September of 2016 hammered out a deal to jointly expand the war against al-Qaeda, but which was then sabotaged by actors inside the Pentagon, specifically the Air Force. In retrospect this strategy of forcing the Washington to engage was never going to work, but it was worth a shot with the information available at the time.

Nonetheless, the fact was that Russian intervention did run directly against the efforts of the CIA (and to a much lesser extent also the Pentagon) in arming the rebels. It also went against the hopes and dreams of western cruise missile liberals who deceived themselves as eagerly as ever the jihadi rebels were worth supporting and an improvement over the secular government.

It is also a fact that Russians won this contest and that the jihadi-spearheaded regime-change was beaten back. Simultaneously ISIS was eliminated so that today Russia and Pentagon no longer share a common military goal, making the two forces much more clearly opposed to one another than they started out.

The difference between the Russian attempt to have a say in Yugoslavia in 1999 and in Syria in 2015 was then not in then in their boldness. It was arguably more daring to try and block NATO from the airport and northern Kosovo than it was to start beating down on ISIS more than twelve months after the US had started to do just that.