Another week and we see yet another violent attack against a black man wearing a MAGA hat, as unhinged open border liberals are sending death and personal threats out to Trump immigration officials, yet liberals are decrying conservatives and President Trump for daring to criticize Congresswoman Ilhan Omar for her own statements, claiming conservatives are inciting violence and death threats against her.

Ilhan Omar recently referenced 9/11 as “someone did something,” with claims that all Muslims were then blamed for what a small group did, which she was roundly criticized for, by not only conservatives publications like the new York Post, and President Trump in a tweet showing her words overlayed with scenes from 9/11, along with social media users, but she was also taken to task by a prominent American Muslim woman, who just happens to be a doctor that treats those that were first responders in New York on 9/11, for post traumatic stress.

Dr. Qanta Ahmed in an op-ed at Fox News calls Omar “an embarrassment and a disgrace for me and other American Muslims with her outrageous, ignorant, anti-Semitic and now anti-American comments.”

These are criticisms over publicly spoken words by Omar, yet Democrats and Omar supporters are claiming she is a victim because she is receiving death threats, and they are attempting to blame President Trump because he used her own words against her.

I find that extremely hypocritical of her since she herself attacked a Trump administration official, Stephen Miller, who happens to be Jewish, by calling him a “White Nationalist” in a tweeted statement, which said “Stephen Miller is a white nationalist. The fact that he still has influence on policy and political appointments is an outrage.”

She wrote that on April 8, 2019, it was retweeted almost 24,000 times and received almost 100,000 likes, and by April 16, we see articles detailing protests at his home, death threats and threats of personal injury.

And top White House immigration adviser Stephen Miller has faced protests at his condo complex and was heckled at a restaurant last year. What’s more, his face was printed on “Wanted” posters placed on lampposts near his downtown Washington condo.

“There is a cost, a personal cost, in today’s hyper-partisan environment with an increasingly vocal hard left on immigration,” said the official.

Republican Congressman Lee Zeldin responded to Omar’s falsely labeling Stephen Miller as a white nationalist, by stating, “During my time in Congress before @IlhanOmar got here, I didn’t once witness another Member target Jewish people like this with the name calling & other personal attacks. In 2019 though, for @IlhanOmar, this is just called Monday.”

He is right, she and others, have a nasty little habit of throwing out verbal bombs, then crying foul when the explosion blows back onto them.

Make no mistake, death threats against anyone are wrong, and shouldn’t happen in the course of a political discussion, but the media has helped promote the idea that to criticize words or actions of Omar or other liberals is actually an “incitement” to violence, yet when the liberals (and the media!) falsely label conservatives, who then receive death threats, those liberals are somehow the victims.

The only thing they are a victim of is their own irresponsible words.

Leftists: “Stop with the irresponsible rhetoric! Lives are at risk!”

In his next tweet he concluded “By the way, when a liberal fired 70 rounds into a GOP baseball game, did any of these Democrats warn about “incitement” and “rhetoric”? No? Not one? That’s because they’re all a bunch of conniving frauds and con artists and nothing they say should ever be taken seriously.” 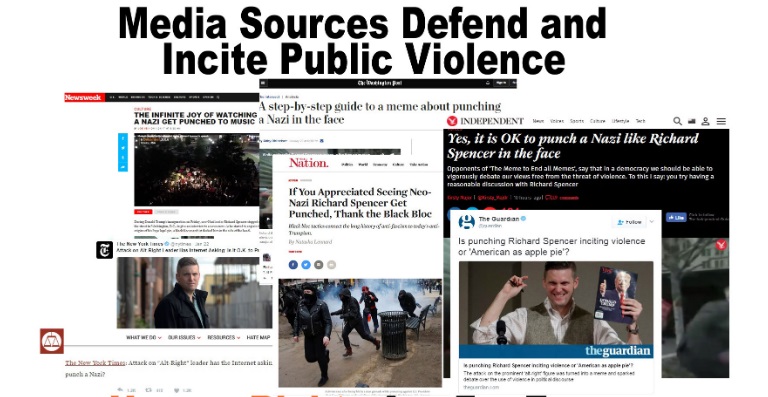 WHO IS REALLY INCITING VIOLENCE?

While politicians have always been hyperbolic, the mainstream media, which promoted all the narratives that Mr. Walsh mentioned above, with wall-to-wall coverage, before each case was proven to be “fake news,” must be held to account for the part they have played in inciting almost daily outrage among liberals, which has led to over 600 acts of violence, threats and harassment of Trump supporters from 2015 to November 2018.

The liberal media has allowed pundits to call Trump supporters racist, Nazis, white supremacist and white nationalist, allowed to compare Trump supporters to rapists and a whole host of other derogatory descriptors, which they never push back on, letting their viewers believe all the lies, and this has led to innocent men and women, and in some cases, teenagers, being attacked in public for wearing any type of Trump supportive gear, like Make America Great Again hats.

Last week we reported on a Mexican supporter of president Trump being verbally attacked by a crazed woman in a post office because she was wearing a MAGA hat, then the woman became totally unhinged when the Trump supporter started filming her.

This week, we see two men have been arrested after attacking a black, legal immigrant from Togo, because he was wearing a MAGA hat. They punched him and knocked him to the ground, smashed his headphones, attempted to steal his phone, then ran when the police arrived after a witness called them. They then tried to hide amongst children playing basketball.