America as Religion by Linh Dinh for UNZ Review

I just got off Skype with Kevin Barrett. Interviewed, I sat in the dusty office of our dustier plastic recycling plant. Truck horns and roosters crowing provided background noises. Though we covered many topics, I want to expand on just one, that of America as a religion.

Unless you’re a reactionary, assbackward asshole, you believe in progress, as in history definitely has an aim, and that’s to reach the Messianic Age, where there will be no more war, all races will be harmonious and equal (except one will be a tad more equal than the rest, because more circumcised and chosen) and Yahweh will beam his benevolence on your sorry ass, even if you’re goy as fuck. “The arc of the moral universe is long, but it bends toward justice,” so just keep on tearing down as you forge forward, comrades, and if you want a passing grade, don’t even try to argue against Moses, Marx and George Soros. All progressive visions are derived from Jewish messianism. All of history, then, is a mere prologue and foreskin to the Messianic Age, just beyond the blood red horizon, and since America is the chest-thumping most advanced country on earth, not just with gadgets but ideas, America is the vanguard of this religion of progress. Though more threadbare by the second, this is a fitting mantle, since America has become Israel’s humongous schwanz.

America has even landed men on the moon six times, 225,623 miles away, without a glitch! Yes, it couldn’t rescue hostages from Iran or pretend to assassinate Bin Laden in Pakistan without crashing its helicopters and leaving a mess of charred corpses behind, but moon landings were much easier, you moron, because there were no Muslims there to spook the astronauts! As with the Holocaust and 9/11, we have photographic proofs! How can you argue with such impeccable photos, with the aperture, shutter speed and ISO just right? America hasn’t returned simply because the technology fell through the crack, and can’t be found again, even with a broom with an extra-long handle. 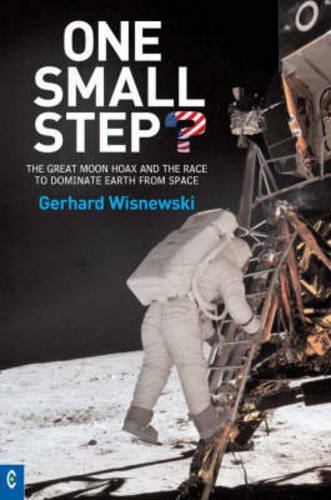 Just now, Ron Unz published “The Moon Landing: A Giant Hoax for Mankind?” by one MOON LANDING SKEPTIC, but on April Fools’ Day, and with a long disclaimer as the first comment. Though most commenters joined Ron in howling at the piece, Kevin Barrett, Godfree Roberts and Jonathan Revusky supported it, and I’d like to add my name to this list, for there are way too many obvious lies in the official story, and the photographs are clearly fake. Even with today’s cameras, with their compact sizes, large view finders and automatic focus, it’d be impossible to take so many perfectly framed and exposed photos in a row, without flops. Not one betrays even the slightest camera shake. Armstrong wasn’t so much the first man on the moon, as the first tripod.

In One Small Step? The Great Moon Hoax and the Race to Dominate Earth from Space, Gerhard Wisnewski explains, “Of course one might understandably assume that what NASA has published and put on the Internet are only the best photos, with any amount of duds being omitted. But this is not the case. NASA has supplied the Internet with the complete first film supposedly shot by Neil Armstrong. The pictures are numbered consecutively with no gaps, and are shown under the heading: ‘Apollo 11 Hasselblad Film Magazine 40/S Unabridged – First Lunar EVA (digitally scanned by JSC in 2004 from original film roll).’ There are exactly 120 pictures – numbered from 5850 to 5970. Although a handful are ‘unintentional’ releases of the shutter, the ‘intentional’ ones are all perfect. In that sense none of the pictures on that film are failures.”

That’s impossible, even if Armstrong wasn’t shooting with a camera attached to his chest, with only the vaguest idea of what he was aiming at. If only I could photograph as well as Armstrong’s tits!