The U.S. Oil Story Nobody is Telling

The U.S. Oil Story Nobody is Telling BY JODY CHUDLEY for Daily Reckoning

Everyone knows that American shale oil production is booming.

The mainstream media has been all over the story.

They should be. After all, what the entrepreneurial U.S. oil and gas industry has done to free oil long-trapped in shale rocks has been incredible.

This is the untold story of the oil market — one that we can take advantage of as investors.

We knew that there was lots of oil trapped in shale rocks, but it was uneconomical to produce.

As a result, U.S. Gulf Coast refineries were built to process the only oil that they expected would be available to them — heavy oil imported from Canada, Venezuela and the Middle East.

Heavy oil is a dense type of crude that doesn’t flow easily — picture molasses. Heavy oil also contains impurities like carbon and waxes and therefore is more expensive to refine into finished products.

Because it is more expensive to refine, it is less valuable. Heavy oil usually sells at a significant discount to a light oil blend like West Texas Intermediate (WTI), which is the oil price that is commonly referred to in the financial media.

The shale oil revolution created a surge in production, but more specifically a surge in light oil production.

This is not the type of oil that most of the multi-billion dollar Gulf Coast refineries were built to process.

This lack of light oil refining capacity on the Gulf Coast is why we are seeing American oil exports explode higher. We can’t refine all of the light oil being produced from shale here in America, so we have to send it abroad where there is still refining capacity for it. 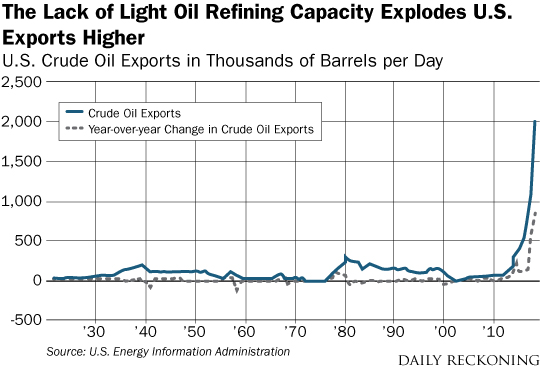 Don’t let these exploding oil exports make you think that we have too much oil here in the United States.

In fact, the U.S. is still a big net importer of oil.

We are only exporting light oil specifically because we don’t have enough refining capacity to process this specific type of oil.