In an interview I did last week with USA Watchdog’s Greg Hunter, I came across as a lukewarm gold bull. Although many of those who commented apparently agreed with my grim deflationary scenario for the global economy, the negative implications this could have for gold did not resonate with Greg’s audience. 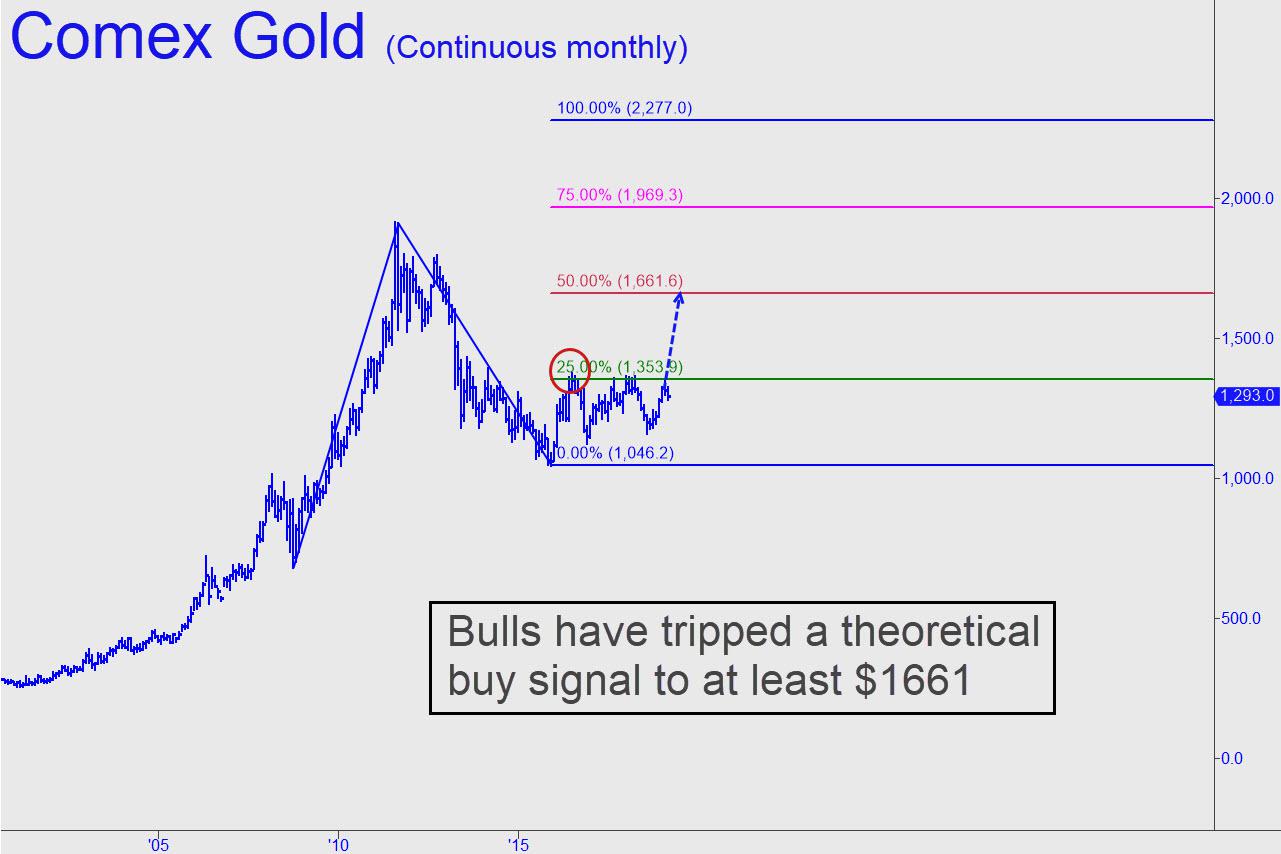 In fact, I see significant appreciation potential for gold, although not to the celestial heights that some seers — most visibly Jim Sinclair, who has been predicting $50,000 an ounce more or less forever — envision. The chart (inset) shows a logical pathway to $2277, a target that in my estimation would become an odds-on bet to be reached if Comex futures can close for two consecutive months decisively above the $1661 ‘midpoint Hidden Pivot’.  They have already tripped a theoretical buy signal to this number at $1354 (the green line), making it no worse than a 50-50 bet to be reached.

Bullion Is Not Cash

Although this outlook might not thrill gold’s most ardent fans, it equates to a 28% appreciation from these levels. And if the $2277 target were to be reached, that would amount to a gain of 71%. In the meantime I see limited risk in holding gold as insurance, as I always have. Come hell or high water, even if there’s a global deflationary bust, I see bullion at least retaining its purchasing power against virtually all other classes of investable assets. I continue to advise keeping a shoe box filled with (admittedly worthless) U.S. ones, five, tens, twenties, fifties and hundreds just in case, since any attempt to exchange bullion for necessities in the wake of a full-blown financial panic are apt to be met with quizzical stares. Of course, in the weeks, months and possibly years following the bank-system shutdown that is coming, credit-card transactions will become impossible. I should mention that I have been putting aside gold, silver and platinum coins for my two sons since they were born and that neither, perhaps inspired by my example, has elected to cash out.

Want to get in on the fun? Click here for a free two-week trial subscription that will give you access to all paid features and services of Rick’s Picks, including daily, actionable trading recommendations and a ringside seat in a 24/7 chat room that draws veteran traders from around the world.