Just like in many places within the EU, American legal and illegal immigrants are the largest recipients of welfare per capita

Just like in many places within the EU, American legal and illegal immigrants are the largest recipients of welfare per capita by Ken Schortgen for Shotgun Economics

With the Democrats today wanting to not only eliminate the office of ICE, but open our borders to any and all immigrants from across the world, a new study out on March 12 shows that a large portion of the current legal and illegal immigrants living in the U.S. are on the welfare dole.

In fact according to the report, legal and illegal immigrants use welfare nearly twice as much as regular citizens do, meaning that per capita any increase in these numbers would blow up a system that currently costs taxpayers more than $1 trillion per year at the Federal level alone. 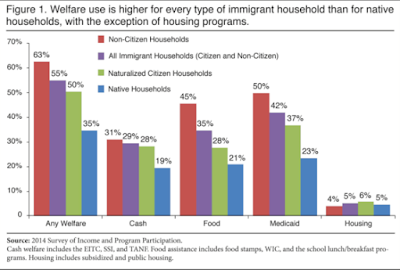 New research has discovered that foreign noncitizens use nearly two times the amount of welfare as native-born Americans. Both legal and illegal aliens fall into the category of foreigners who take from the welfare system.

According to a report by Breitbart, in recently released research by the Center for Immigration Studies (CIS), analysts discovered that about 63 percent of noncitizen households, those who live legally and illegally in the U.S., use some form of public welfare while only about 35 percent of native-born American households are on welfare. – SHTF Plan

The U.S. is not the only country or region where vast migration has threatened to destroy current welfare systems.  In Europe, where the European Commission has embarked on a massive migration scheme, Northern European country’s such as Denmark and Finland are on the cusp of economic and political collapse due to influx of immigrants who rarely work, but receive thousands in free benefits.

There is a reason in history why certain nations and regions prospered and achieved while others simply languished in what we now call ‘third world status’.  And bringing in peoples from cultures not known for growth and innovation rarely changes their paradigms, especially when they can simply take from those who have a background and tradition of hard work and success.