After watching the entire Covington Catholic student versus frail elderly Native American Vietnam veteran fiasco where the media was utterly humiliated, yet again, when the entire story was revealed showing they had promoted a selectively edited short video that created an entirely false narrative, then rewarded the lying Native American’s version of events, even after the entire narrative was debunked, I theorized the media’s own bias was used against them by unsavory actors to promote a fake narrative that would go viral.

While the fall-out was still hitting the media over Covington Catholic scandal,  we watched them rush to judgement after Empire actor Jussie Smollett claimed he had been attacked by “white” MAGA supporters who called him racist and homophobic names, just to find out after two weeks of the media pushing the “racist, homophobic” attack, that the police uncovered enough evidence to arrest Smollett himself for staging the attack and filing a false police report, to which the actor still denies.

We now find out that a “hate crime” against an LGBT, transgender activist, Nikki Joly, that occurred in 2017, where his home was burned down, with his five pets, two dogs and three cats inside, is no longer  considered a hate crime because police have collected what they believe to be sufficient evidence that Joly set the fire himself to fake a hate crime.

(If you like stories like this, please consider donating to ANP to help keep independent journalism alive.)

PEOPLE FAKE HATE CRIMES BECAUSE THE MEDIA ENCOURAGES IT

On February 18, 2019, The Daily Caller published a shockingly long list of proven hate hoaxes that have occurred since 2016, all the way up until early 2019, and after reading that list of documented examples, all together, along with the three examples listed above, I am left with a question: “Why do people fake hate crimes?

I have seen a number of theories dependent on the specific case. With Smollett the police indicated their witnesses claimed he was dissatisfied with his salary of $100,000 per episode, and that after he arranged to have a fake hate letter with innocuous white powder delivered to the studio in his name, he felt it was not given enough attention, so he staged the attack against himself.

The fact that he had his friends buy red hats (like MAGA hats), and he claimed the “white” attackers, which in reality were two black brothers, yelled “This is MAGA country,” indicates, if true, that Smollett was deliberately attempting to frame Trump supporters to further push the media narrative that conservatives are racists.

Given Smollett’s past comments it was obvious he hates President Trump, so that has to be taken into consideration, that he wanted to tarnish Trump supporters. I mean, why else would he claim two white men were out in Chicago at 2 am, carrying bleach and rope to tie around his neck and yelling “This is MAGA country?”

In the Nikki Joly case, he didn’t own the home that he allegedly burned down, but according to Robby Soave over at Reason Magazine, Joly did garner more than $58,000 in donations by people sympathetic to what they thought his plight was.

After going through the Daily Caller’s list, reading each case, the hoaxers all have a few things in common.

• In every case they were from a minority group, blacks, Muslims, gay activists, Jewish, Mexican, etc… Groups that continuously claim they are “marginalized,” and proclaim victimhood status.

• Another commonality is that in most cases they were claiming the (fake) attack was racist in nature, alleging the perpetrators were white males, with many, like Smollett, attempting to set up another group, Trump supporters.

• The last thing these cases have in common is that the mainstream liberal media had a field day with these now debunked, fake news stories. The media automatically assumed the claims were true before investigations had been completed, providing wall-to-wall coverage in some cases, with quite a bit of analysis, all negative, about white male Trump supporters.

The media, in my opinion, is responsible for the increasing number of staged crimes and hate hoaxes. Remember it is the liberal media that has pushed the narrative of Trump supporters being “like rapists,” and allowing guests to call them Nazis, to insist that the MAGA hat is a “symbol of racism,” and these hoaxers see that day in and day out, and know that the media will reward them if they claim they were attacked, making sure to give them extra attention if they blame Trump supporters and/or conservatives.

The media promotes the fake narrative, then rewards the hoaxers, which in turn encourages others to fake yet another hoax.

These hoaxers are not just seeking attention, they are specifically seeking “media attention,” in order to seed more division, hate and discord among Americans, and the media is all too happy to help them. 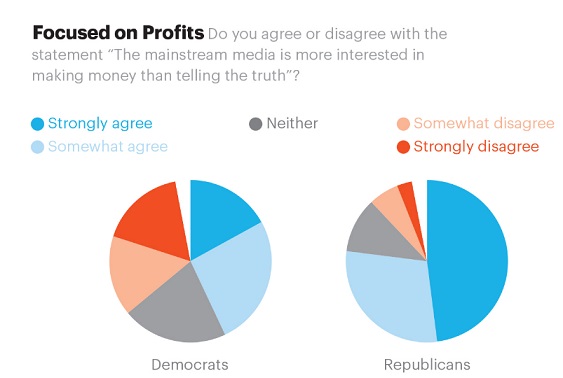 THE MEDIA HASN’T LEARNED A LESSON, BUT AMERICANS HAVE

Year by year we see multiple polls by a variety of organizations, all showing the decline in trust and/or confidence in what they consider the mainstream media.