Originally published in 2016 but may be more relevant to day than ever before.

INTERNAL STRATEGY DOCUMENTS and emails among Clinton staffers shed light on friendly and highly useful relationships between the campaign and various members of the U.S. media, as well as the campaign’s strategies for manipulating those relationships.

The emails were provided to The Intercept by the source identifying himself as Guccifer 2.0, who was reportedly responsible for prior significant hacks, including one that targeted the Democratic National Committee and resulted in the resignations of its top four officials. On Friday, Obama administration officials claimed that Russia’s “senior-most officials” were responsible for that hack and others, although they provided no evidence for that assertion.

As these internal documents demonstrate, a central component of the Clinton campaign strategy is ensuring that journalists they believe are favorable to Clinton are tasked to report the stories the campaign wants circulated.

At times, Clinton’s campaign staff not only internally drafted the stories they wanted published but even specified what should be quoted “on background” and what should be described as “on the record.”

One January 2015 strategy document — designed to plant stories on Clinton’s decision-making process about whether to run for president — singled out reporter Maggie Haberman, then of Politico, now covering the election for the New York Times, as a “friendly journalist” who has “teed up” stories for them in the past and “never disappointed” them. Nick Merrill, the campaign press secretary, produced the memo, according to the document metadata: 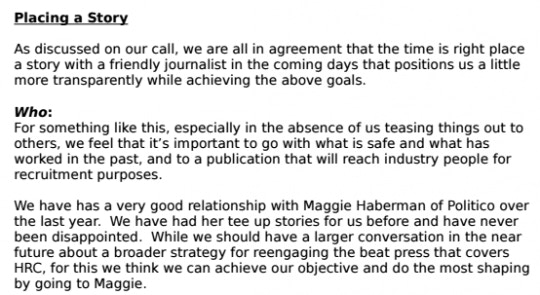 That strategy document plotted how Clinton aides could induce Haberman to write a story on the thoroughness and profound introspection involved in Clinton’s decision-making process. The following month, when she was at the Times, Haberman published two stories on Clinton’s vetting process; in this instance, Haberman’s stories were more sophisticated, nuanced, and even somewhat more critical than what the Clinton memo envisioned.