On Wednesday we saw the 38 page Sandmann lawsuit, where the family of Nicholas Sandmann, the MAGA hat wearing Covington Catholic student that was maliciously brutalized by the media, which resulted in threats of violence and death against Covington Catholic students, is suing the Washington Post, the first of many outlets, celebrities and high profile social media users, for a whopping $250 million. Substantial compensatory damages in an amount not less than Fifty Million Dollars ($50,000,000.00) and punitive damages in an amount not less than Two Hundred Million Dollars ($200,000,000.00). The $250,000,000 being asked for is the exact amount Amazon CEO Jeff Bezos paid to buy the Washington Post.

The lawsuit is embedded lower down in the article.

On Thursday I watched the brutal Chicago PD press conference, along with the question and answer period afterward, where the Chicago PD Superintendent Eddie Johnson blasted not only Empire actor Jussie Smollett for staging an “attack” against himself in order to claim that MAGA supporters jumped him at 2 am in the morning while he was strolling back to his apartment from getting a Subway sandwich, used racial and homophobic slurs against him, and put a rope around his neck, but the superindent also blasted the liberal establishment media for giving more attention to the Smollett fake hate hoax than they do legitimate Chicago murder victims.

The full press conference is embedded at the bottom of this article.

The commonality between the two stories is the media’s abject failure in investigative reporting, and how they instantly push every narrative without any type of fact-checking, that negatively impacts conservatives and Trump supporters, which is also mentioned in the Sandmann family lawsuit against Washington Post. On page 2, it states “The Post ignored basic journalist standards because it wanted to advance its  well-known and easily documented, biased agenda against President Donald J. Trump (“the President”) by impugning individuals perceived to be supporters of the President.” 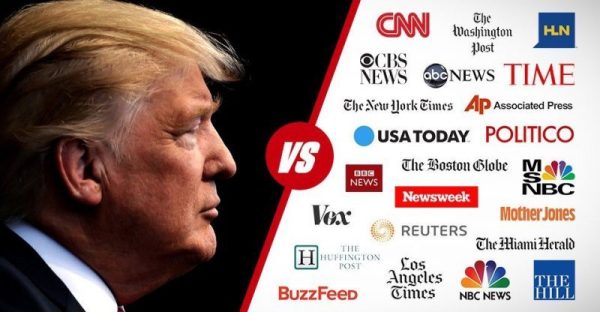 THE HELL THE MEDIA IS IN RIGHT NOW IS SELF-INFLICTED

As many already know, the Covington Catholic students were accused by the media, led by the Washington Post, of “surrounding” a Native America elder, who was described as a “Vietnam veteran,” “mocking him,” and “taunting him.” The media used a selectively edited small clip taken from a nearly two-hour full video, which was released by the time the media started writing their “MAGA supporters bad” narrative.

In the lawsuit, the lawyers for the Sandmann family, since the media made him the face of those Covington Catholic students,  accuse Washington Post of “modern-day form of McCarthyism by competing with CNN and NBC, among others, to claim leadership of a mainstream and social media mob of bullies  which attacked, vilified, and threatened Nicholas Sandmann (“Nicholas”), an innocent secondary school child.”

The lawsuit also accuses the post of “wrongfully targeted and bullied Nicholas because he was the white, Catholic student wearing a red “Make America Great Again” souvenir cap on a school field trip…..” It lists multiple stories from Wapo, even after the full video, which showed the students did not support the Indian man, he approached them, they did not mock or taught him, and the man was a veteran but not a Vietnam veteran.

Everything the media reported, and continued to report was patently false, as was concluded by a third party investigation firm for the Covington Diocese.

“I’d be interested to see how the case unfolds. I mean they’re asking for a lot of money, I don’t think that’s going to be taken too seriously,” he said. “But I do think that they have a significant case and it will be interesting to see how the Post defends against their reporting in the case.”

“It’s important to air this issue out in the public, and one of the functions that a suit like this has is to lay it all out in the public,” he continued. “The media has to be responsible for their reporting particularly when you have kids who have no ability generally to defend themselves against media reporting.”

Sandmann attorney L. Lin Wood has subsequently said that over the course of the next two years, there are possibly hundreds of other entities, including journalists, other news outlets, celebrities and other social media users with a high amount of followers, that also slandered, defamed, and in some cases threatened the Covinton Catholic students, and they would be filing lawsuits against a high number of them.