Break Down Of Media Fake News Covington Catholic Student Narrative Is Complete, And The MSM Wants Their Humiliating Failure To Just Disappear

Break Down Of Media Fake News Covington Catholic Student Narrative Is Complete, And The MSM Wants Their Humiliating Failure To Just Disappear By Susan Duclos – All News PipeLine

The independent, third party investigation into the events surrounding the “face off” between pro-life, Covington Catholic high school students and an elderly Indian man, at the Lincoln Memorial back in late January, has been completed and has found the students, despite the media’s massive fake news disinformation campaign, did nothing wrong, and in fact are being commended by the Diocese of Covington for how they conducted themselves.

The mainstream media’s handling of this actual news has been dismal at best as many news stations that helped perpetuate the original lie and made it go viral online, didn’t even address the completion of the formal investigation, nor the investigation firms findings.

ANP covered the original controversy in detail here, here, and here, so I will just give a brief recap for new readers.

Covington Catholic high school students joined the pro-life March in DC, were harassed by a group of black Hebrew Israelites, then an Indian man by the name of Nathan Phillips approached the students, got right up in the face of one of the students, Nick Sandmann, and started beating his drum in his face and chanting.

The entire incident was caught on multiple camera phones, and a nearly two hour video of the entire event was published online, as was a selectively edited four minute-plus clip taken from the longer version.

The media jumped on the four minute clip, while Independent Media tried to show the entire clip, as we at ANP, and many, many others attempted to provide the entire big picture, but the media continued to incite liberals with the selectivey edited video and headlines claiming the students “surrounded” the Native American “Vietnam veteran” and “taunted” and “mocked” him.

A Google search, custom range of just articles published on January 19, 2019, the day the selectively edited clip went viral, shows exactly how the media framed their narrative and ran with the selectively edited video. A small sample, just from the first of many pages of the search results, shown in the screen shot below: 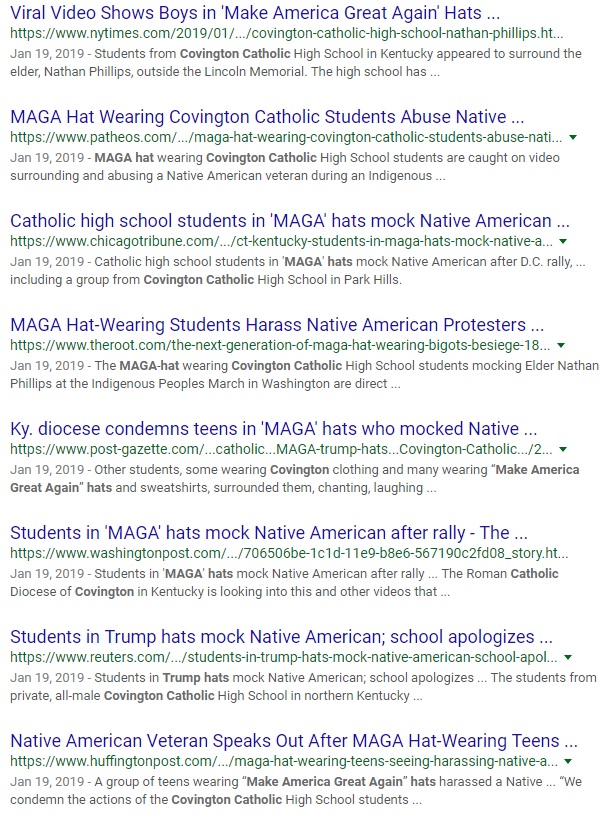 That type of coverage by the liberal establishment media continued for days.

The result was liberals all across social media, as well as so-called “journalists,” and celebrities, attacked the Covington students, threatening them, calling them “punchable,” and in one case suggested that they all be put in the school and the school should be burned to the ground.

The full video coverage showed the students did not surround the man, he approached them. Furthermore, they did not “mock,” nor “taunt” him, they joined in with his chant. Finally the Indian man was a veteran but unlike his previous statements that the media repeated without investigating, he was not a “Vietnam” veteran.

On February 11, 2019, the Diocese of Covington, issued a statement about the completion of a third party, independent investigation. The Diocese of Covington initially condemned the students based on the selectively edited short video the liberal establishment media made go viral, claiming they had been bullied into issuing a premature statement. Days later they apologized for that initial condemnation, and directly apologized to Nick Sandmann.

I am pleased to inform you that my hope and expectation expressed in my letter to you of 25 January that the results of our inquiry into the events of 18 January at the Lincoln Memorial in Washington, D.C. would “exonerate our students so that they can move forward with their lives” has been realized. Our inquiry, conducted by a third party firm that has no connection with Covington Catholic High School or the Diocese of Covington, has demonstrated that our students did not instigate the incident that occurred at the Lincoln Memorial.

In these past several weeks since the original video went viral two well-worn and oft-used adages have come to mind: Seeing is believing and Perception is reality. The immediate world-wide reaction to the initial video led almost everyone to believe that our students had initiated the incident and the perception of those few minutes of video became reality.

In truth, taking everything into account, our students were placed in a situation that was at once bizarre and even threatening. Their reaction to the situation was, given the circumstances, expected and one might even say laudatory. These students had come to Washington, D.C. to support life. They marched peacefully with hundreds of thousands of others – young and old and in-between – to further the cause of life. These young high school students could never have expected what they experienced on the steps of the Lincoln Memorial while waiting for the busses to take them home. Their stance there was surely a pro-life stance. I commend them.

Following the link provided by that page, we see a 4-page PDF from Greater Cincinnati Investigations, titled “Final Investigative Report.”

Under the scope of investigation, the reports indicates that four licensed investors were involed in the investigation, which included 240 man hours. Student statements were obtained and they interviewed 43 students. The interviewed 13 of the 16 chaperones that were present for the event, nine faculty and four parent chaperones. The reviewed “50 hours of internet activity, including but not limited to all major news networks, YouTube, Vimeo, social media accounts on Facebook, Instagram and Twitter.”