German Industrial Production Falls the Most Since 2009. New Orders Plummet

Q4 is falling apart before everyone’s astonished eyes, and a “technical recession” beckons.

“Unexpectedly,” German industrial production fell 3.9% in December 2018 compared to December 2017, after having fallen by a revised 4.0% in November, according to German statistics agency Destatis Thursday morning. These two drops were steepest year-over-year drops since 2009.

Even during the European Debt Crisis in 2011 and 2012 – it hit Germany’s industry hard as many European countries weaved in and out of a recession, with some countries sinking into a depression — German industrial production never fell as fast on a year-over-year basis as in November and December: 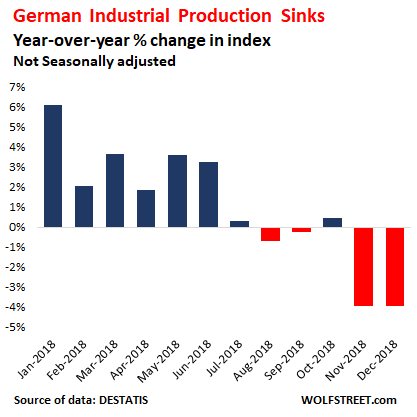 On a longer-term scale, the industrial production index peaked in May 2018 and has since fallen 4.6%. It is now back where it had first been in February 2017: 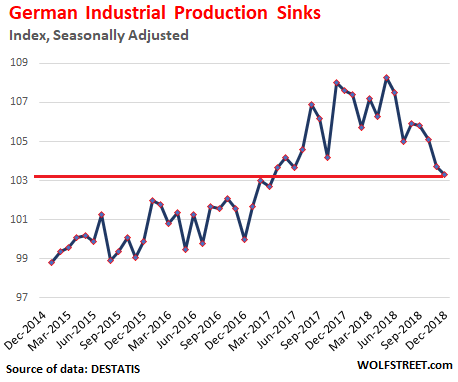 And industrial production is not getting a whole lot better any time soon as new orders for the manufacturing sector have plunged – according to data released by Destatis on Wednesday.

New orders dropped 7.0% year-over-year in December (adjusted for calendar differences), after having fallen 3.4% in November and 3.0% in October. In fact, orders have fallen seven months in a row on a year-over year basis in ever larger drops. The chart below shows the decline in each month compared to the same month a year earlier — with a sharp deterioration at the end of the year: 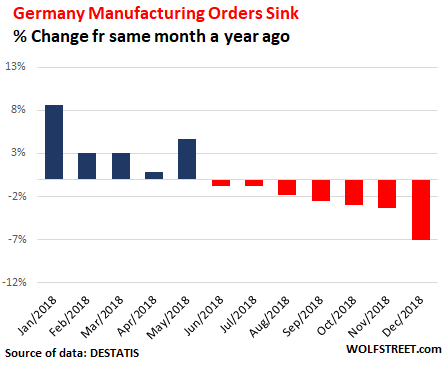 Orders from within Germany aren’t the biggest problem: They fell by “only” 2.6% year-over-year, though it was the fifth straight month of year-over-year declines.