With embattled Venezuelan dictator Nicolas Maduro reportedly preparing to ship 20 tonnes of gold to the United Arab Emirates, opponents of his regime – including one US senator and former presidential candidate – are scrambling to try and stop him.

As we reported Thursday, Maduro’s government reportedly shipped three tonnes of gold to the UAE last week, and, though reports on the exact number vary, he is believed to be preparing to ship another 20 tonnes in the near future. Earlier this week, a member of the Venezuelan opposition warned that a Russian jetliner had landed in Caracas, purportedly with the intent of spiriting away a hefty slice of the country’s already dwindling gold reserves.

But while that plane left allegedly without any gold on board, in its place another plane from Dubai landed, prompting a wave of speculation that Maduro is planning to ship more gold to the UAE, according to Bloomberg. The gold is valued at some $850 million.

Taken together, the 20 tonnes of gold represent more than 10% of Venezuela’s dwindling reserves.

Twenty tons is a lot of gold bars – almost 1,600 of them. Together, they represent about 10 percent of all the Venezuelan central bank’s foreign reserves. Those assets form a key part of the fierce battle for control of Venezuela’s finances between Maduro and Juan Guaido, the National Assembly leader who is trying to install a transitional government with the support of the U.S. and other countries across the region.

Rumors about Maduro’s quest to expatriate the gold come after the Bank of England denied Maduro officials’ request to withdraw $1.2 billion of gold stored in BoE vaults after US officials intervened. 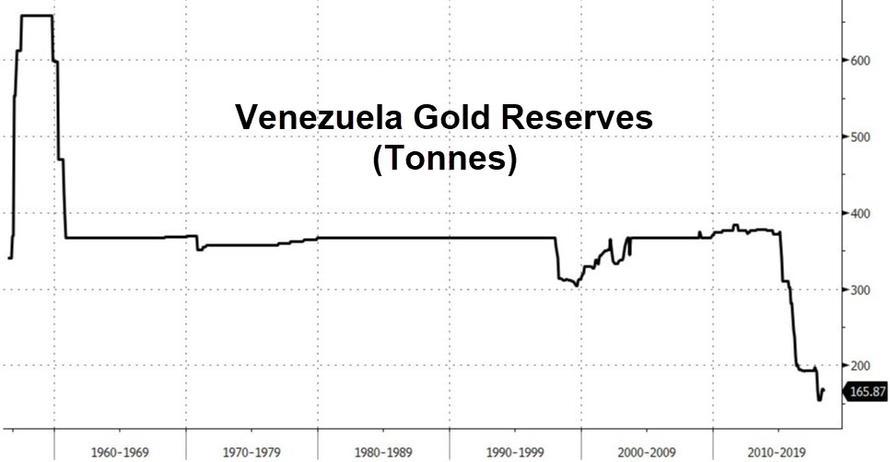 But Florida Sen. Marco Rubio, who has become one of the most outspoken US officials agitating for the toppling of the Maduro regime, tweeted on Thursday that a French national working for Abu Dhabi-based Noor Capital was in Venezuela on Thursday to arrange the “theft” of more gold. He added that the firm, its employee and the airline it hired to help move the gold could be subject to US sanctions.