Supreme Court Justice Ruth Bader Ginsburg has not been seen publicly for nearly two months, and since her lung cancer surgery she has not attended oral arguments in the Supreme Court, and has canceled multiple scheduled appearances.  TMZ did publish a short video showing the top of a head of a person being helped into a car, without any face shots, claiming it ws Ginsburg. Yet the media who went absolutely bonkers while the First Lady Melania Trump was recuperating from kidney surgery and wasn’t seen publicly for a few weeks, apparently has no interest in updating the public on Ginsburg’s condition and well being, yet others are asking “Where’s Ruth?”

Back when Melania was recuperating CNN even made a handy little graphic for Brian Stelter to tweet out, a calendar running from May 11 to June 3, 2018, with question marks on each day, and an image of Melania in the upper left corner under the words “LAST SEEN,” with the date “May 10.” Stelter tweeted the graphic with the comment “If any First Lady “disappeared,” you’d “want to know where she is.” Here’s our @CNN discussion: http://cnn.it/2xFnTH9.” 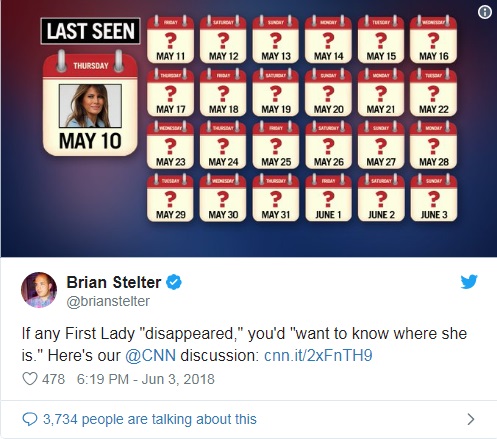 While I grant that the public is interested in our First Lady, Ginsburg has a lifetime appointment to the highest court in the nation, the Supreme Court, and should she be forced to step down because of health issues, or if she passes away, President Trump would get a third Supreme Court nominee in just his first term, so we have to wonder why the media seems to have no interest in where Ginsburg is or when she will return to court.

A Google search from the past week shows a handful of articles about Ginsburg, but not about her health and well being, nor the same type of “RuthWatch” that they conducted daily when Melania was recuperating, but instead the stories are only focused the “conspiracy theories” being discussed on forums and social media,

Listed as Top Stories” on Google, are:

“Trump Allies Think Ruth Bader Ginsburg Is Hiding or Dead. It Started on QAnon” by The Daily Beast.

“Pro-Trump Conspiracy Theorists Running With Claim Ruth Bader Ginsburg is Dead or In Hiding,” by MEDIAite.

MEDIAite provides some comments made over on Twitter by right-wing pundits, like Tony Shaffer that links to an American Thinkerstory, stating “Where is the Notorious RBG? Ruth Bader Ginsburg watch nears the end of its second month…” They also highlight conservative actor James Wood who asks “Seriously though… #WheresRuth?” Wayne Dupree asks “Anyone seen RBG?”  Last but not least for examples, MEDIAite shows former Trump advisor Sebastian Gorka’s tweet stating “Still no sign. 6 days left until Ruth Bader Ginsberg has to make her official appearance at @realDonaldTrump’s State of the Union.”

A quick note about Gorka’s tweet – Ginsburg, in fact no Supreme Court Justice, is required to appear the SOTU address, but after Fox News’ accidentally showed a graphic on-air that indicated that Ginsburg had died in 2019, blaming it on a “control room error,”  along with the 85 year-old’s  frail health after breaking a few ribs in November 2018, then the cancer surgery in December, the optics of her not showing up, as well as not being seen in public, wouldn’t be advantageous to anyone. 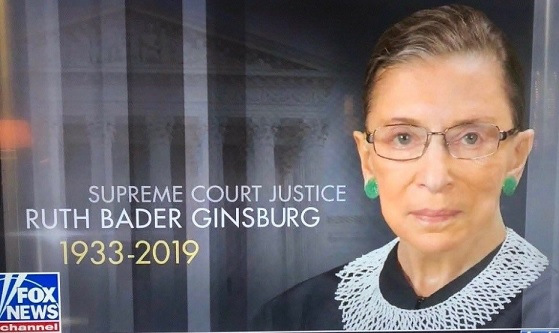 American Thinker explains why there is so much interest in Ginsburg’s recovery and health:

The reason her absence is so monumental is that if her health has compromised her ability to do her job as a member of the highest court in the United States, her removal will give President Trump his third justice nomination of his first term. This would be an apocalypse to the liberal Democrats, who would be faced with the most conservative Supreme Court in modern history for decades to come. If you thought the Kavanaugh nomination was rough, imagine if Democrats doubled their efforts the third time around.

Granted the “autists” over on 4chan and other forums have come out with some pretty wild theories, including claims that Ginsburg is in an induced coma, or brain dead, and there are many “weekend at Bernie” comments flying around suggesting she passed away and “they” are pretending she is still alive so President Trump doesn’t get another Supreme Court pick, but to suggest that legitimate questions about her health are some type of conspiracy, seems suspicious after the liberal establishment media made such a fuss over Melania not being seen in public for a far less amount of time.