If you own something that doubles but you can’t touch it or bring it home, did it really double?

I’m not a fan of Nicolas Maduro nor am I a fan of the policies that have been implemented during his reign as President of Venezuela. I am a huge fan of sovereignty and gold represents a portion of a nations sovereignty. What’s been happening with Venezuela’s gold is of importance to us at The Daily Coin and it should be of importance to you as well, regardless of Maduro or his failed policies.

The ongoing saga that is Venezuelan gold should be a wake up call to anyone with gold outside of their personal possession. If you own physical gold that is not under your direct care, e.g. you have 100% control of the gold 100% of the time, that plan may require serious reconsideration.

When Venezuela originally requested, in 2011, the return of the gold that rightfully belonged to the people of Venezuela Hugo Chavez was alive and the President. Fast forward close to 8 years later and we find President Chavez is dead and has been replaced by socialist President, Nicolas Maduro. We also find the nation in a disastrous social and economic collapse brought on, primarily, by economic policies that have gutted the economy, created a mass exodus by people with an education and funds to do so and left the nation in tatters. Hyperinflation struck more than a year ago and today a cup of coffee would cost the equivalent of a days wages if paid for in Venezuelan bolivars, the national currency.

Venezuela has made a serious of bad economic policy decisions and some of these decisions have impacted their gold reserves. If you we look back at what happened in 2011 we see some of the evidence of a banking cartel that would be upset over a nation disrupting the gold scheme.

In August 2011, the Venezuelan government surprised the gold market when it announced that it would seek to repatriate, at short notice, 160 tonnes of its foreign held gold reserves back to Venezuela for safekeeping. The government also revealed at that time where its gold was located and in what form it was held. 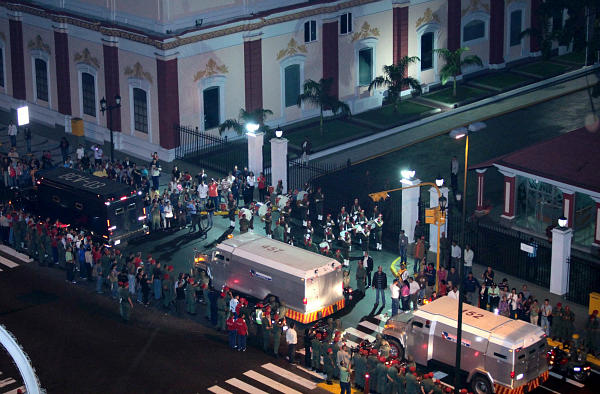 Celebrations as Venezuela’s gold is repatriated to Caracas in 2011

Gold on term deposit earns interest for the central bank but the bullion banks that either accepted the original deposit or took over an existing term deposit would likely have sold or lent the gold in the market. Yet, they would be  obliged to return the same amount of gold when the Venezuelans requested that it be repatriated. Source

Let’s look at what was reported in 2011 and see how much weight it carries today. Before we get started, please keep in mind the banking cartel doesn’t want you or anyone else to know anything so the information and connections from one point to another can get scrambled and seemingly disconnected. This is the reason the bullion banks that either accepted the original deposit or took over an existing term deposit would likely have sold or lent the gold in the market this is a key element to hiding an item in plain sight.

All total there are 8 different banks and one nation, listed above, with their hands in the Venezuelan gold pie. We are only talking about 366 tons in total with 154 of those tons in Venezuela. This leaves a paltry 212 tons of gold, less than one month of Russian gold acquisitions, to be split among 8 different banks. We know the Bank of England is suppose to store 99 tons bringing leaving the other 7 banks with a mere 113 tons to split amongst themselves. That means each of these 7 banks has an average of 16.14 tons in their custody. This does not include Deutsche Bank, the 8th bank that further dilutes the amount of gold held by each bank. Is it any wonder no one can speak honestly about how much or where Venezuela’s gold is located? This is a joke.

Let’s focus on the 99 tons supposedly at the Bank of England. Why is returning 99 tons of physical gold so difficult? Why would it create an international question about Venezuela’s gold? If the Bank of England does in fact have the 99 tons that belongs to Venezuela, pack it up, load it up and ship it out – the end! However, this has not happened.

Today we learned there is a whole other wrinkle to the saga.

Reuters, that bastion of truth, are reporting that not only are Venezuela’s gold holdings in the Bank of England being held hostage they have been decreasing and increasing. The reason for the changes is not readily available, but the numbers are shifting like sands on a beach at high tide.

Venezuela’s gold holdings in the Bank of England have jumped after it closed out a gold swap deal with Deutsche Bank, according to two sources, as Britain remains reluctant to release gold held for the troubled OPEC nation.

The government of Nicolas Maduro has since last year been seeking to repatriate about $550 million in gold from the Bank of England on fears it could be caught up in international sanctions on the country.

Its holdings at the bank more than doubled in December to 31 tonnes, or around $1.2 billion, after Venezuela returned funds it had borrowed from Deutsche Bank AG through a financing arrangement that uses gold as collateral, known as a swap, one of the sources said.

Under the deal struck with Deutsche Bank in 2015, Venezuela put up 17 tonnes of gold in exchange for a loan, according to one of the sources who asked not to be identified because it is not authorized to speak publicly about the issue.

The country’s gold holdings fell to 134 tonnes in November compared with 150 tonnes at the start of 2018, according to central bank statistics.

This is in part because Venezuela last year started carrying out gold barter operations with Turkey to import food following U.S. sanctions that have made international banks reluctant to handle Venezuelan transactions. Source

As if all this is not bad enough, believe it or not, it actually gets worse…

But refusing to hand over the gold, which belongs to Venezuela’s central bank, could cause alarm among countries that store their own bullion in the Bank of England’s coffers.

Maduro’s government is struggling under hyperinflation now approaching 2 million percent annually, and a broad economic collapse has fueled an exodus of some three million people since 2015.

Opposition critics, including exiled leader Julio Borges, have argued that the gold should not be repatriated because it could be used to finance corruption.

Calixto Ortega, president of Venezuela’s central bank, met with Bank of England officials in December to discuss repatriating the gold but was unable to convince them, according to sources familiar with the situation. Source