Robots Rising: How Artificial Intelligence Will Leave Many Human Beings ‘Obsolete’, Stealing Jobs And Leaving Them Impoverished, Homeless & Dying From Starvation By William B Stoecker – All News Pipeline

Maybe a miracle will happen and we will avoid the nuclear holocaust that appears to be heading our way. Maybe we will get spending under control and pay down the national debt and avoid economic and social collapse. Maybe we won’t have a civil war after all, and perhaps we will even get our border under control. I guess miracles can happen…and it looks like it will take several miracles to save us.

But then we would be faced with another problem, one we have failed to really think about. Automation, robots, AI (artificial intelligence) threaten to make most people obsolete, stealing their jobs and leaving them unemployed and impoverished, and, ultimately, homeless and starving. Eternal optimists assure us that robotics will eliminate menial, unpleasant, low-paying jobs but will somehow create other jobs. This is true up to a point, as robots will require computer software designers and maintenance people.

Also, automation will allow our companies making running shoes in Bangladesh to bring their factories back to the US, eliminating shipping costs, and replacing the foreign workers with robots and at least a handful of Americans to program and service the machines. But for every new job created, most available to the small subset of the population capable of mastering the required skills, several jobs will be lost…after all, that is the whole purpose of robotics, to save money for corporations by eliminating all those payrolls. 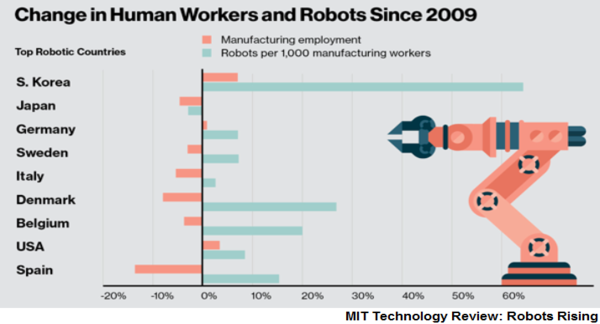 So far we have seen industrial robots assembling and welding, replacing workers on assembly lines, and computer filing and word-processing technology has replaced many clerical workers and secretaries. Old style telephone operators were replaced long ago by automation. One of the most available jobs today is driving vehicles, including delivery trucks, taxis, buses, trains, or big rigs, and driverless vehicle technology is advancing very, very fast.

Even for aircraft, fly by wire technology can evolve into real robot aircraft, even airliners. Automated tellers have replaced many human bank tellers. Stores and fast food restaurants are beginning to evolve into high-tech super vending machines, needing no clerks, cooks, dish washers, or waitresses. Farmers will have self-driving tractors and combine harvesters, and even jobs requiring sight, a delicate sense of touch, and precise hand movements, from picking fruit and vegetables to cleaning chicken or fish, will soon be automated.

It is all very well to say that these were often stressful, dirty jobs, often performed under poor working conditions, and it is true that human beings are not designed to perform menial, repetitive tasks for hours on end. We seem designed to do a variety of things with minimal supervision, the sort of work done by hunter-gatherers or subsistence fishermen, or to be writers, musicians, and artists. But there will not be a lot of paying positions in these fields. And we are clearly not designed to be idle.

Parasites are degenerate life forms; I spent years as a Social Security Claims Representative and a Welfare Department EligibilityWorker, and, believe me, fourth generation welfare recipients are parasites, and they are degenerates. If everyone had a guaranteed income with no work required, most people would go downhill rapidly. This is the “moral hazard” of a guaranteed minimum income. And could we, as a society, even afford to pay everyone enough to subsist on? I am assuming that simply allowing eighty percent or more of the population to fall into poverty and then starve to death is not an option. (And if they did, who would buy all the products churned out by the robots?) 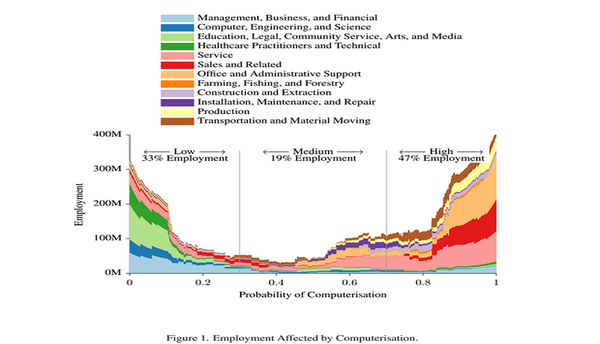 Looked at one way, the costs would be astronomical. But our economy for many decades supported a thriving middle class. Our productivity is greater than ever, so it is obvious that we still can. But what entity will provide the funds, subject to what conditions? Almost certainly the government would have to do it, bringing us back to the socialism many of us wanted to escape. As the saying goes, a government that can give you anything can take everything. With most of the population dependent on the government, freedom could soon be lost. And whom would the government tax, if most citizens had no independent income?