This article was originally published on December 12, 2018. The serious questions raised in the piece remain completely unanswered.

Why was Barr chosen, given his shocking and deeply criminal/cover-up kingpin background?

Was Trump duped by Deep State enemies, who have placed another predator into his administration with the power to destroy his presidency? Or has Trump co-opted and turned Barr, in the hopes that Barr will do Trump’s bidding? Why would Barr ever turn against his own Deep State cronies?

Does Trump have a plan? With Barr in place, is Trump signaling to his enemies that “I now own the Deep State”? Or is Barr the Deep State’s ultimate and final weapon against Trump, who remains surrounded by Bush/Clinton “swamp creatures” such as National Security Adviser John Bolton, who is one of Barr’s many fellow Iran-Contra co-conspirators, Vice President Mike Pence (who is in ideal position for a coup against Trump, and remains very cozy with the Clintons, dozens of Obama appointees that remain in place, and Republican “Never Trumpers”, all of whom continue to undermine Trump.

Pay careful attention to the confirmation “hearings”. How many of the senators “questioning” Barr are themselves connected to the Bush/Clinton era criminal operations that Barr supervised as George H.W. Bush’s attorney general?

Will anyone in Washington, or in the CIA asset-filled mainstream media, dare bring up Iran-Contra? Will anyone dare detail Barr’s corruption, and his longstanding ties to the Bush/Clinton network? What about the fact that Barr is best friends with Robert Mueller?

Even the alternative media, including the whistleblowing research-intensive pro-Trump anon community, has been virtually silent on Barr, despite the fact that his criminal history is glaringly obvious, lurid, and begging to be exposed.

Rumors abound that slippery Deputy Attorney General Rod Rosenstein is expected to leave the Justice Department following Barr’s likely confirmation. This further clears the way for Barr to seize the power to determine the fate of the Mueller probe, the John Huber (Inspector General) report, FISAgate, Clinton emails, Uranium One, and other key investigations.

William Barr could well determine the course of the political war between President Donald Trump and his enemies, and decide  the fate of Donald Trump’s presidency itself.

Should William Barr serve as the highest law enforcement official of the country?

For a presidential administration whose mandate was the eradication of corruption, the “draining of the swamp”, and the restoration of law?

With the nomination of William Barr for attorney general, that is what President Donald Trump wants American citizens and the world to accept.

The fact is, there is nothing to “respect” and everything to condemn about Barr’s work as a key inner circle operative throughout George Herbert Walker Bush’s rise to power, from CIA Director to Vice President to President. These aspects of Barr’s resume remain whitewashed by mainstream coverage. They have been amply documented by whistleblowers and those who worked directly with Barr.

The issue at hand is not Barr’s “legal mind”, but the ruthless mind that he wielded with frightening authority and expertise as George H. W. Bush’s treasonous hatchet man in the Justice Department. William Barr distorted and corrupted the law, as grossly as anyone in modern history.

It is a sobering fact that American presidents (many of whom have been corrupt) have gone out of their way to hire fixers to be their attorney generals.

Barr, however, is a particularly spectacular and sordid case. As George H.W. Bush’s most notorious insider, and as the AG from 1991 to 1993, Barr wreaked havoc, flaunted the rule of law, and proved himself to be one of the CIA/Deep State’s greatest and most ruthless champions and protectors:

A strong case can be made that William Barr was as powerful and important a figure in the Bush apparatus as any other, besides Poppy Bush himself.

To understand the scope, scale, and gravity of William Barr’s central role working for  George H.W. Bush, one must grasp the significance of Iran-Contra, the massive criminal operation that was the cornerstone of the Bush era, headed by the Bushes, with the Clintons as partners.

Originally coined “Iran-Contra” (in reference to illegal arms sales to Iran in exchange for American hostages in Lebanon and arms to the Contra “freedom fighters” in Nicaragua), the moniker hides the fact that it became a massive and permanent criminal business and political machine that went far beyond then-current political concerns.

In The Conspirators: Secrets of an Iran-Contra Insider, Al Martin describes the Iran-Contra Enterprise that a vast operation that included (and was not limited to) drugs, weapons, terrorism, war, money laundering, criminal banking and securities fraud, currency fraud, real estate fraud, insurance fraud, blackmail, extortion, and political corruption that involved countless Washington politicians of both Republican and Democratic parties.

“Iran-Contra itself is a euphemism for the outrageous fraud perpetrated by government criminals for profit and control. Offhandedly, this inaccurate term entered history as shorthand for the public scandals of illicit arms sales to Iran coupled with illicit weapons deals for Nicaragua. The real story, however, is much more complex…When George Bush, [CIA Director] Bill Casey and Oliver North initiated their plan of government-sanctioned fraud and drug smuggling, they envisioned using 500 men to raise $35 billion….they ended up using about 5,000 operatives and making over $35 billion.” In addition, the operation became  “a government within a government, comprising some thirty to forty thousand people the American government turns to, when it wishes certain illegal covert operations to be extant pursuant to a political objective” with George [H.W.] Bush “at the top of the pyramid”.

The operation’s insiders and whistleblowers place George H.W.Bush as one of its top architects, and its commander. It was carried out by CIA operatives close to Bush since his CIA directorship and even stretching back to the Bay of Pigs. These included Oliver North, Ted Shackley, Edwin Wilson, Felix Rodriguez, and others. Iran-Contra was a replication of the CIA’s Golden Triangle drug trafficking in Southeast Asia (operations also connected to Bush) but on a larger scale and sophistication, greater complexity, and far-reaching impact that remains palpable to this day. 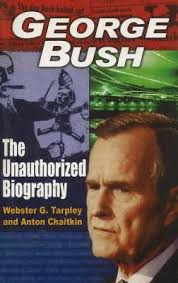 In George Bush: The Unauthorized Biography, Webster Tarpley wrote that, “many once-classified documents have come to light, which suggest that Bush organized and supervised many, or most, of the criminal aspects of the Iran-Contra adventures.”

“all of these structures revolved around [creating] the secret command role of the then-Vice President, George Bush…The Bush apparatus, within and behind the government, was formed to carry out covert policies: to make war when the constitutional government had decided not to make war; to support enemies of the nation (terrorists and drug runners) who are the friends and agents of the secret government.”

This suggests that George H.W.Bush not only ran Iran-Contra, but much of the Reagan presidency. Then-White House press secretary James Baker said in 1981,

“Bush is functioning much like a co-president. George is involved in all the national security stuff because of his special background as CIA director. All the budget working groups, he was there, the economic working groups, the Cabinet meetings. He is included in almost all the meetings.”