Are We Witnessing The Last Generation Of Real Men?

Are We Witnessing The Last Generation Of Real Men? By Susan Duclos – All News PipeLine

A Nation Full Of ‘Soy Boys’ & Feminazis Is Doomed For Extinction

Between the constant attacks on masculinity, the Xenoestrogen chemicals in household products that are decreasing both birth and fertility rates in America, the ongoing media and LGBT push to confuse yet another generation of children as to their “gender identity,” we note the increasing frequency of “men,” and yes I am using that word loosely, like the ones shown above, and the decrease in the “Alpha” male, who has been the backbone of this nation since its inception.

There are called “Soy Boys,” which are described best by the Urban Dictionary as “Slang used to describe males who completely and utterly lack all necessary masculine qualities. This pathetic state is usually achieved by an over-indulgence of emasculating products and/or ideologies.”

The origin of the term derives from the perceived negative effects soy consumption upon testosterone levels.

I used the image above of four men, Ned Fulmer, Keith Habersberger, Zach Kornfeld and Eugene Lee Yang, otherwise known as the “Try Guys,” because they are a perfect example men with very low testosterone levels (They had their levels tested in Seaon 9, Episode 13 of their Internet “show), and how the media establishment pushes these Soy Boys to help spread their anti-masculine agenda.

Here were the results, along with a chart of what is considered normal testosterone levels beneath their results. 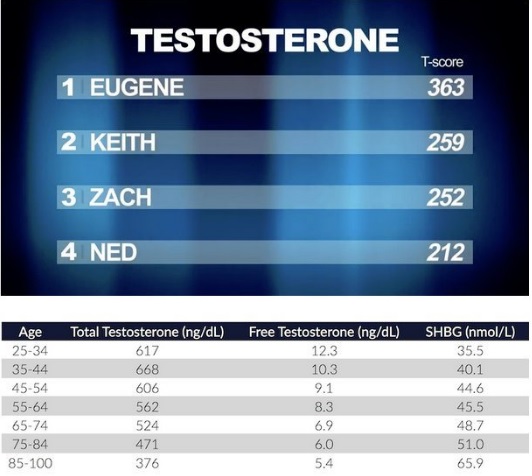 Even Eugene, who tested the highest in testosterone levels out of the four, didn’t even rise to the level of testosterone found in 85-100 year old men.

As to the media push, BuzzFeed first produced the “Try Guy” series, which started in 2014, until 2018 when the four started their own production company to go out on their own.

I am not sure what is more disturbing, the content seen when I was researching and tried to watch even one of their segments to completion, or the fact that this show is so popular with liberals that it generated enough revenue to produce nine seasons and is still going.

Note– I found the content so offensive I refuse to embed even one of their video episodes, but for those that want to verify my assertion about the offensiveness, their video channel is here.

The ‘Try Guys’ represent much of what we are seeing on the left, with feminists AKA feminazis, along with the media, and the LGBT community, constantly dehumanizing the “white male Christian,”  calling them “toxic,” and the all out push to turn men into feminized soy boys.

This agenda can be seen in the images of Antifa members, designers creating clothing line for men that include dresses skirts, make up companies using “male covers,” children being hailed as “drag” kids, etc…. 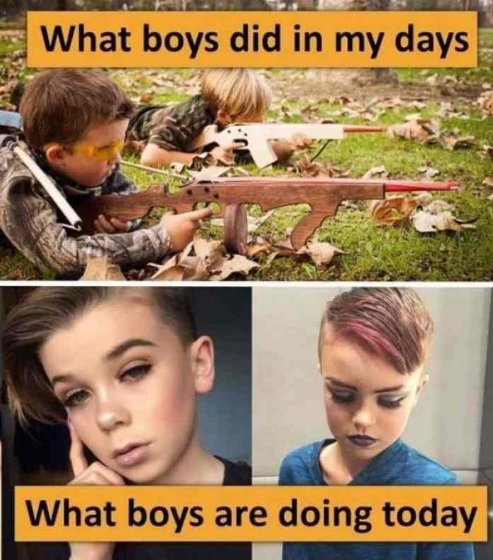 COUNTERING THE FEMINIZATION OF MEN

From schools pushing the LGBT “gender identity” ideology to young children, to the media’s push of the “beta male,”  to the LGBT community helping to create more and more soy boys, to the chemicals that are feminizing men, on top of feminists doing everything in their power to turn Alpha men into little girly men,  the reason we are seeing an increase in feminized men are varied and documented, but there are natural ways to counter it.

The fact is this isn’t a losing battle if people are aware of ways they can increase testosterone levels in young boys and men, naturally, which is covered in another Health Line article. Those include excercise and weight lifting, which ca boost testosterone levels. Foods with protein, carbs, and fats, can have a major impact in raising the levels.  Minimizing stress. Getting out into the sun or taking vitamin D. Getting plenty of rest and high quality sleep.

Most importantly, look at the list of home products that contain Xenoestrogen and avoid them, especially if you have children and want to prevent your child from becoming a soy boy, feminized male.

We are hearing quite a bit about the “sex bot revolution” which generally focuses on how men are turning to robots for sex, but there is another aspect of this disturbing “revolution” that isn’t spoken about as often. We note a direct correlation between the increase in feminized men to the popularity spike in sex robots for women.