Angel Moms Call Out Nancy Pelosi: Would You Support Border Wall if It Saved Your Loved One?

Angel Moms Call Out Nancy Pelosi: Would You Support Border Wall if It Saved Your Loved One? by John Binder – Breitbart

Angel Moms whose children have been murdered by illegal aliens living in the United States called out incoming House Speaker Rep. Nancy Pelosi (D-CA) and Sen. Chuck Schumer (D-NY), asking them if they would support a border wall if it meant their loved ones would be saved from illegal alien crime.

Angel Mom Mary Ann Mendoza from Arizona — the co-founder of AngelFamilies.org — singled Pelosi out, noting that the House Minority Leader has never met with Angel Families to discuss the illegal immigration crisis.

After watching the debacle in the White House the other day, I was very ashamed to even think that Nancy Pelosi would be Speaker of the House, to think that Chuck Schumer is a Senator in the United States. [Emphasis added]

And the thing that really bothers me about Nancy Pelosi is she goes on and on and on about the cost of the wall, but what Nancy Pelosi fails to talk about is the cost of supporting illegal aliens in our country, which is already at $136 billion and by not building the wall, that number will keep increasing every single year. So she’s failing to tell the American taxpayers, ‘Hey, follow my lead and more money is going to be coming out of your pockets,’ instead of building a wall for a flat fee and be done with it.

The other thing that Nancy Pelosi fails to ever talk about, ever, is the victims of illegal alien crime. Those are our children amongst hundreds of thousands of others. Unfortunately, our children have been murdered or killed. [Emphasis added]

Mendoza’s son, 32-year-old police officer Brandon Mendoza, was killed by a drunk illegal alien who was driving the wrong way down a highway in Mesa, Arizona.

“We are fighting so that no other American family has to feel the pain and the grief that we do. We’re tired of being ignored by politicians in D.C.,” Mendoza continued. “No Democratic politician will ever meet with us, will never meet with us … because they can’t face us.” 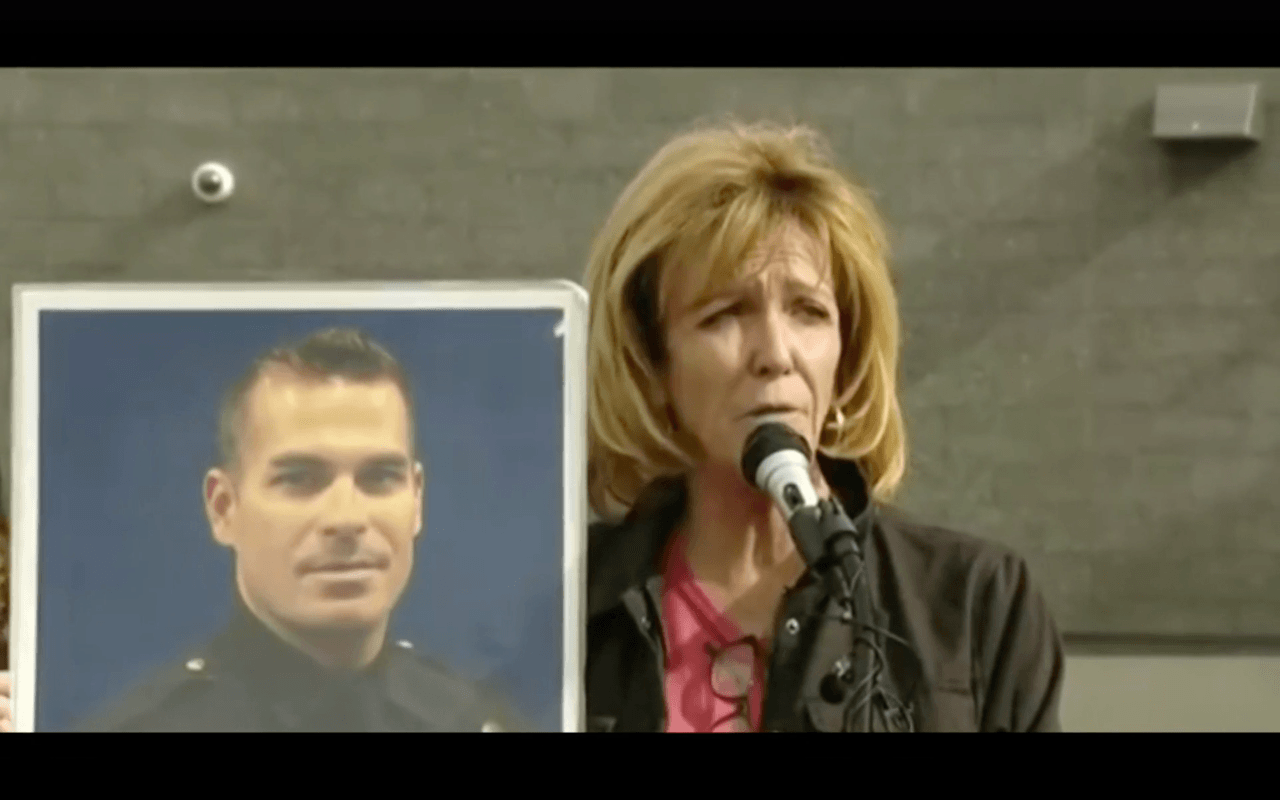 Angel Mom Mary Ann Mendoza shows a photo of her son, Brandon Mendoza, who was murdered by an illegal alien. (Screenshot via CBS San Diego)

“I want to ask Nancy Pelosi this and I hope she hears this: How much of the cost of the wall would mean to you Nancy if it can be predicted that a loved one of yours could be saved two years from now because that wall was built,” Mendoza asked of Pelosi. “I’m sick of hearing about innocent Americans becoming collateral damage in this fight.”

“Not one more American life needs to be lost at the hands of an illegal alien criminal in this country,” Mendoza continued.