Stocks Are Down Just 10%… So Why Are the Powers That Be So Terrified?

Stocks Are Down Just 10%… So Why Are the Powers That Be So Terrified? by Graham Summers – Gains Pains Capital

The Powers That Be are getting desperate.

Yesterday marked the third time in the last FIVE trading sessions that we have a coordinate intervention to prop up stocks. Not only are the exchanges “throttling” the flow of sell orders so that selling pressure doesn’t overwhelm buyers, but “someone” has been placing large orders of stock futures to induce a rally.

You can guess who that “someone” is.

So what is the big concern? After all, stocks are a mere 10% off of their all-time highs after staging the longest bull market in HISTORY. A 10% correction is a healthy thing after a rally of this magnitude. 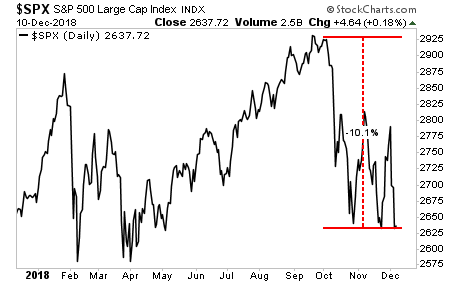 The Powers That Be are terrified of the below chart. 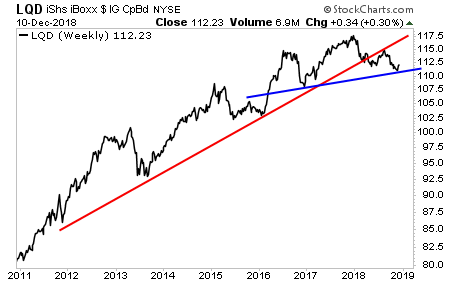 As you can see, investment grade corporate bonds have broken their bull market trendline and are now barely clinging to CRITICAL support.

By the way, these are INVESTMENT GRADE bonds… as in bonds that SHOULDN’T be in trouble.

If that blue line goes, we’re moving into a crisis as a wave of defaults will begin. With an expected $1.2 trillion in corporate debt at risk of default in the next downturn, we’re talking about SYSTEMIC risk.

Remember, the US financial system is MORE leveraged today than it was in 2007. What do you think will happen to the stock market once companies start defaulting on their bonds (hint: stockholders come LAST when it comes to liquidations). 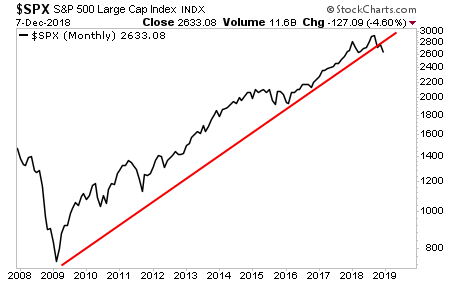 If you’re looking for a way to profit from this, Private Wealth Advisory subscribers have already turned the October and November drops into profits…

… all told we’ve locked in SEVEN winners in the last two weeks, with gains ranging from 7% to 11%.

And we’re now preparing for the next leg down… which is going to be the BAD one.

During those 30 days you’ll receive:

1)   A copy of my bestselling book, The Everything Bubble: The Endgame For Central Bank Policy.

3)   At least THREE trades ideas (by the way, we’re running an 82% WIN rate on closed positions in 2018 thus far, meaning we’ve made money on more than EIGHT out of every 10 positions we’ve closed).

This offer expires today at 5PM. We’ve extended it by a day based on yesterday’s interventions, but this is IT… NO MORE extensions.

To reserve one of the remaining slots…