Are We Sleepwalking Into Armageddon?

Are We Sleepwalking Into Armageddon? By Stefan Stanford – All News Pipeline

– Is WW3 The Globalists End Game? Civil Unrest Would Begin In Hours If Not Minutes

According to this important new story over at The Nation written by Stephen F. Cohen, an expert on U.S.-Russian relations, a nuclear war between America and Russia is increasingly growing likely due to the ‘RussiaGate’ allegations being spewed by the left for the last two years. Warning immediately within his story that the new ‘US-Russia cold war‘ is even more dangerous than its 40-year predecessor that our planet thankfully survived, Cohen then hinted we may be ‘sleepwalking‘ into Armageddon, with the possibility of a nuclear catastrophe rarely discussed within the mainstream media nor mainstream political discussions.

Warning then that the latter months of 2018 have been littered with a mounting series of crises that only continue to grow worse, he then outlines for us how the core ‘Russiagate’ allegations have become a central part of this new cold war, constraining President Trump from working with Russian President Vladimir Putin to help cool the growing tensions.

Paul Joseph Watson breaks down for us in the only video at the bottom of this story just how “Trump Derangement Syndrome” could actually ‘trigger’ this ‘new cold war’ to go ‘hot’ as even President Trump himself warned of in a tweet back in July as seen in the screenshot at the top of this story. From Cohen’s story over at The Nation:

In the latter months of 2018, the facts and the mounting crises they document grow worse, especially in the US political-media establishment, where, as I have argued, the new Cold War originated and has been repeatedly escalated. Consider a few examples, some of them not unlike political and media developments during the run-up to the US war in Iraq or, historians have told us, how the great powers “sleepwalked” into World War I:

§ Russiagate’s core allegations—US-Russian collusion, treason—all remain unproven. Yet they have become a central part of the new Cold War. If nothing else, they severely constrain President Donald Trump’s capacity to conduct crisis negotiations with Moscow while they further vilify Russian President Vladimir Putin for having, it is widely asserted, personally ordered “an attack on America” during the 2016 presidential campaign. Some Hollywood liberals had earlier omitted the question mark, declaring, “We are at war.” In October 2018, the would-be titular head of the Democratic Party, Hillary Clinton, addedher voice to this reckless allegation, flatly stating that the United States was “attacked by a foreign power” and equating it with “the September 11, 2001, terrorist attacks.”

Clinton may have been prompted by another outburst of malpractice by The New York Times and The Washington Post. On September 20 and 23, respectively, those exceptionally influential papers devoted thousands of words, illustrated with sinister prosecutorial graphics, to special retellings of the Russiagate narrative they had assiduously promoted for nearly two years, along with the narrative’s serial fallacies, selective and questionable history, and factual errors. 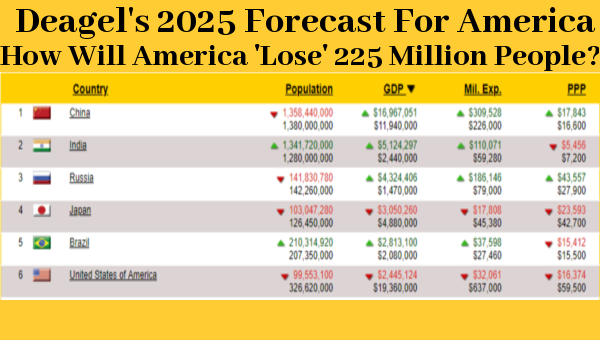 And for those who somehow insanely believe that a war between America and Russia might be a ‘good thing’, as Dr. Peter Vincent Pry warned in this December 2nd story on ANP, even the United States military is finally warning about what such a war with Russia might bring in an extraordinary and sobering new report: nothing less than the end of ‘America’.

We’ve gone ahead and embedded the US military’s new report in full at the bottom of this story for all to read if you haven’t yet had the opportunity but be forewarned, the results show an America looking much closer to what the globalist-linked website Deagel.com is forecasting for America in 2025  than the America we live in today in 2018.