What Happens When Stocks Wake Up to What Bonds Are Warning About?

What Happens When Stocks Wake Up to What Bonds Are Warning About? by Graham Summers – Gains Pains Capital

A Personal Invitation From Graham Summers – The Everything Bubble: The Endgame For Central Bank Policy: an astonishing 85% off on the Kindle version.

The single most important market in the world is the bond market.

Which is why anyone who wants to protect his or her capital going forward should take note that the US bond market is inverting for the first time since 2007. 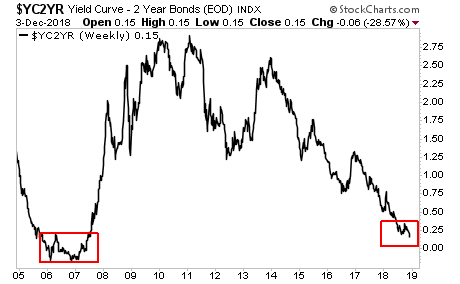 This is a MAJOR warning that there is BIG trouble in the shadow banking system. Again, the last time this hit was in late 2006-early 2007, right before the world moved into the worst financial crisis in 80 years.

Indeed, while everyone is celebrating the rally yesterday our Crash trigger remains in a critical “sell.” The last time this triggered was right before the October meltdown.