10 Ways President Trump Can ‘Red Pill The Masses’ In America

On November 30th we published this story on ANP within which we reported we’d soon be putting out a story outlining a number of different ways that President Trump could ‘red pill‘ the masses and awaken tens of millions to ‘reality‘ and ‘deep state tyranny and crimes‘ against the American people so here we are today.

With the end of what many of us have long considered ‘normalcy‘ now here, this story will take a look at 10 different topics (some with numerous subtopics) that outline and detail for us some of the ways that the American people have been lied to over the years by the ‘deep state‘ and mainstream media and while the msm will surely call a story like this ‘fake news‘, those who’ve long been paying attention know that much of what is going on behind the scenes has long been covered up.

So with the inevitable ahead of us, as we hear in the first video below from Randy Conway, it’s now more important than ever to prepare for huge changes ahead in America and the world with scientists now warning the global food supply is broken at a point in time when the globalists are becoming increasingly desperate as they see nationalism emerging across the planet and people quickly moving away from the belief that ‘globalism‘ can solve our problems. So let us begin without any more hesitation. 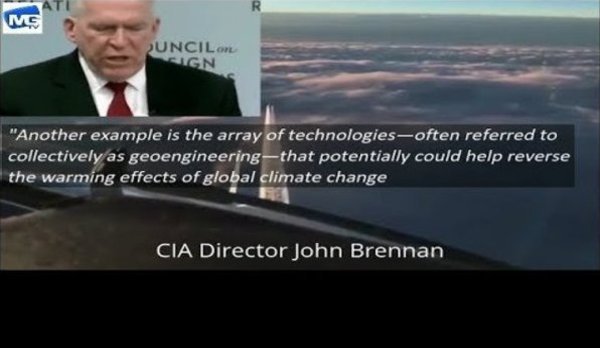 1) Declassify any and all documents tied to geoengineering and other ‘weather modification projects’ and ‘strategic aerosolinjections’.

EVERYBODY on the planet is affected by the weather so this is where we’ll begin.

According to the mainstream media and most Americans, anybody who believes that ‘man can play God with the weather‘ should be wearing tinfoil hats or committed to mental institutions yet as we’ve seen in many stories over the last few years, ‘weather modification‘ is very real and nations and individuals have admitted to it.

As the South China Post reported back in March, with China now admitting they need more water, they’ve built a ‘rain making network‘ 3 times the size of Spain! While the mainstream media leaves their few remaining viewers dumbed down to weather modification, Quartz reported all the way back in 2013 that China had been creating 55 billion TONS of artificial rain every year, with plans to quintuple that amount!

And while the ‘gatekeepers’ will laugh and mock when someone calls out the ‘chemtrails‘ above our heads, that may be because they’re officially called ‘strategic aerosol inductions‘ according to former CIA head John Brennan who told the Council on Foreign Relations back on June 29th of 2016.:

“Another example is the array of technologies—often referred to collectively as geoengineering—that potentially could help reverse the warming effects of global climate change. One that has gained my personal attention is stratospheric aerosol injection, or SAI, a method of seeding the stratosphere with particles that can help reflect the sun’s heat, in much the same way that volcanic eruptions do.

On the geopolitical side, the technology’s potential to alter weather patterns and benefit certain regions at the expense of others could trigger sharp opposition by some nations. Others might seize on SAI’s benefits and back away from their commitment to carbon dioxide reductions. And, as with other breakthrough technologies, global norms and standards are lacking to guide the deployment and implementation of SAI.”

With Bill Gates recently announcing he’ll help fund a $2.3 million study into how scientists can block the suns rays to help combat ‘global warming‘ by spraying microscopic particles into the sky to mimic a volcanic eruption, imagine the ‘splitting of heads‘ that would take place all across America should President Trump declassify documents tied to HAARP, our own geoengineering projects to cool the planet, weather warfare and other topics long hidden from the American people by the globalists who long ago sold out America.

And while Gates wants to cool the planet, what if the planet is already entering a new mini ice age as we had asked on ANP back on November 29th? The very last thing that should be happening if our planet is already entering a new and extended cold period due to lack of sun spots as one NASA scientist has argued is happening now is for us to help ‘usher in the ice age‘ by further blocking out the sun’s rays in the skies.

As we’d reported in that November 29th story, extended periods of cold weather almost always come along with massive and sometimes worldwide famine, so please take Randy Conway’s advice in that 1st video below to heart.

2) Declassify any and all documents related to Barack Obama’s background.

Back on June 6th of 2012, then billionaire businessman Donald J. Trump put out the tweet seen above, asking why Barack Obama was spending millions of dollars to hide his records and pointing out that Obama was one of the least transparent president’s in US history. And as Trump pointed out then, Obama RAN on ‘transparency‘!