Businesses That Buckle To Snowflakes Are Learning The Cost Of Appeasement

Over the last decade we have seen a number of costly business decisions made for no other reason than a minority of people, the “politically correct” crowd, otherwise known as the “perpetually outraged” crowd, screamed the loudest over some type of imaginary and manufactured offense.

Since it is December, we’ll start with the bad business decisions on the part of retailers to start using the term “Happy Holidays” rather than Merry Christmas in their advertisements, calling a Christmas tree and “Holiday” tree, or disallowing their employees to wish shoppers a Merry Christmas, insisting they say “Happy Holidays.”

Many businesses discovered the hard way, through the loss of business, that Americans as a whole, are not as “tolerant” regarding the war on Christmas, than the loud mouths trying to erase Christ from Christmas, in the very month that Christ’s birth is celebrated.

Organizations fighting back against this war on Christmas started their “Naughty or Nice” lists, highlighting the companies that didn’t not buckle to the politically correct crowd, as well as those that did, and slowly but surely, some of those that suffered financially for their misguided decisions started reversing them.

THE COST OF APPEASING THE SNOWFLAKES

This brings us to a bigger issue of how companies are making very bad business decisions to appease a minority of snowflakes that manage to find something to be offended over, daily.

Recently a Cleveland radio station, WDOK, decided to remove the 1944 Christmas classic, ‘Baby It’s Cold Outside,” from their song playlist because a listener called in and complained the song was not appropriate in 2018 and the #MeToo era.

One host claimed “It wasn’t really our decision. It’s the decision of our listeners.” According to the Fox News’ report, the station claims they took a poll on their website and the majority of their listeners voted in favor of removing the song, but those results were not posted to the website.

The station did put out a public poll on the Star 102 Cleveland Facebook page, asking their listeners “Should we play ‘Baby, It’s Cold Outside’ during the holiday season?”  Out of more than 8.4 thousands votes, an overwhelming 94 percent of their listeners said “Yes, it’s a classic,” with only 6 percent saying “No, it’s inappropriate.” 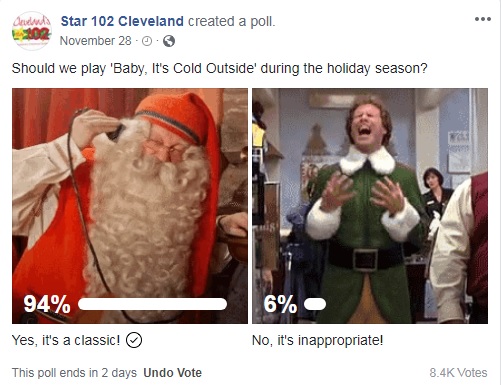 The station is being shredded in the comment section of that poll, with the overwhelming majority of the nearly 1,000 comments tearing into them for allowing six percent of their snowflake listeners force them to remove the Academy Award  winning song from their line up.

Recently we reported that liberals were up in arms over another Christmas classic, ‘Rudolph the Red Nose Reindeer,’ calling it “problematic, but it isn’t just Christmas those “addicted to outrage” are attacking. They recently attacked the decades old “A Charlie Brown Thanksgiving,” calling it racist.

The radio station’s decision is a perfect example of companies and businesses failing to learn from the mistakes of other businesses that allowed a small minority of loud mouthed snowflakes to dictate their businesses decisions.