Extinguishing a Thousand Points of Light, One at a Time

Extinguishing a Thousand Points of Light, One at a Time from Neon Revolt

Wooooooooooooooow. What a night! What an absolutely unbelievable night!

I know there’s going to be more than a few members of the #QArmy waking up to a bevy of posts – and the recent news – and wanting to know what exactly is going on, but man… What an incredibly night. (And yes, there were 17 drops tonight. #NoCoincidences).

(That said, I think we can chuck the “count-down” theory from the last post out the window! Q does what Q wants, when Q wants)!

And if you follow me on Gab, you’ll know I’ve taken to posting the #QDrops on Gab as soon as I see them, so you may have seen some of these screencaps already, but the commentary is fresh, as are the Anon posts.

So get ready to dig in! 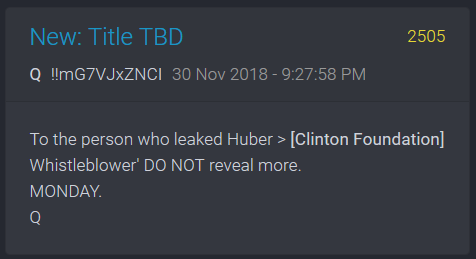 And John Solomon had the leak on Hannity:

Oh, what a wonderful surprise!

Q didn’t seem too upset with the “leak” but he was stern; DO NOT reveal more.

And this comes hot-on-the-heels of Comey’s efforts to challenge his own subpoena, requiring him to testify on Monday as well. Comey, as we all know, has tweeted out a lot of grandstanding about making the hearing public – which would (conveniently) allow him to skirt around any questions regarding classified material, as well as allow other bad actors to coordinate their stories.

Of course, the judge involved postponed the ruling on the matter until Monday, too, lol:

Judge Trevor McFadden gave the two sides the weekend to provide additional information about their arguments. The court will reconvene Monday at 10 a.m. for a ruling.

Yeah, this is going to give Comey absolutely no time to respond, should the ruling come out against him (meaning… Comey has to testify).