Of course, there are innumerable subfactors behind each of the main factors that form a lattice of cause and effect and that lend themselves to inferential methods. Still, the top-level “three arrows” predictive analytic model has served us well when it comes to oil prices.

The first factor is basic supply and demand. If global economies are growing strongly or if supply channels are jammed or restricted in any way, that arrow will be green, indicating higher prices. Conversely, in a global slowdown or a situation in which Russia, Saudi Arabia and the U.S. have their taps wide open, the arrow will be red, pointing toward lower prices. 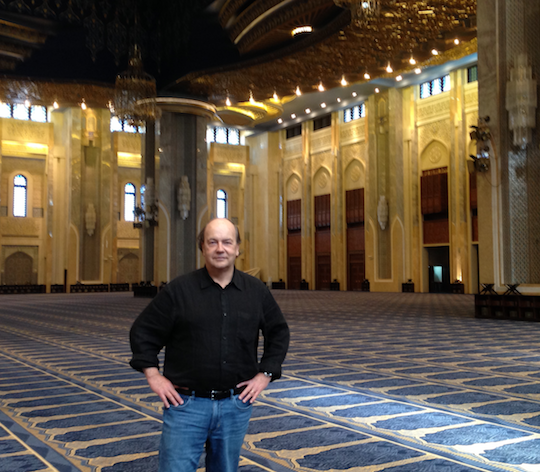 Your correspondent inside the Grand Mosque in Kuwait City, Kuwait. The Grand Mosque
is one of the largest mosques in the world. My frequent visits to the Middle East
are useful for understanding the extent of Arab cooperation in setting oil
prices and the geopolitics of oil output in the Persian Gulf region.

The second factor is inflation/deflation, which can influence oil prices independent of growth. It’s entirely possible to have inflation in a recession (called “stagflation”) or to have deflation in a growth phase.

Japan has experienced this since the 1990s, and the U.S. has had growth with disinflation at times from 2009–2017. Inflation/deflation respond to real interest rates, capital flows and exchange rates. Inflation is a green arrow and deflation (or strong disinflation) is red.

Likewise, cooperation and peace among major oil-producing nations — or at least the absence of hostilities — will produce a grey (neutral) or red (lower) arrow with respect to oil prices.

The geopolitical factor has to be treated carefully. Most analysts assume that a war among oil-producing nations is automatically a cause of higher oil prices. That’s not true unless oil facilities are directly targeted. A war among oil suppliers actually results in higher output, not lower, as the warring powers are desperate to earn cash to fight the war.