As even the liberal website Daily Beast is suggesting that President Trump must “Smash Facebook and Its Tech Oligarch Friends,” providing some very real numbers and percentages regarding the stranglehold on information these “oligarchs” are abusing, we find a number of stories which give ample evidence that big tech’s rampant abuse, manipulation of information, and censorship practices must be reined in.

Google (Alphabet) has been humiliated once again by their reliance on Wikipedia for their “information panels, ” as recently it was reported that when searching for “National Federation of Republican Women,” the information panel to the right of the search results which describes their organization, showed users the description “The National Federation of Republican Enablers is the women’s wing of the Republican Party in the United States.” It then lists where they obtained their information, “Wikipedia.” 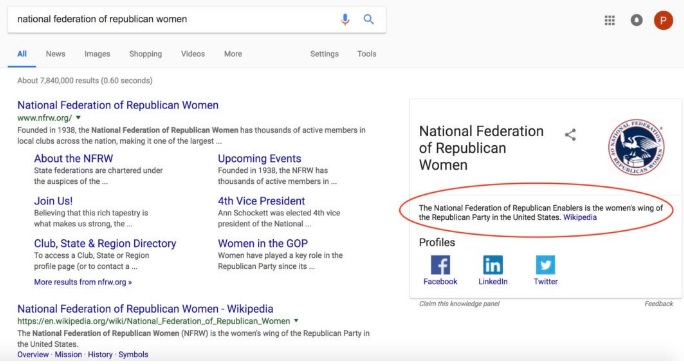 Google cited Wikipedia for the disparaging description, though Wikipedia’s page for the women’s group doesn’t contain that description.

Wikipedia’s edit history shows on October 19 someone replaced the word “women” in the group’s name with “enablers.” The change lasted about five hours on Wikipedia before it was reversed.

But three weeks after the digital vandalism was reversed on Wikipedia, Google’s “knowledge panel” about the Republican women’s group still described them as “enablers.”

After the Daily Caller published an article showing how Google was falsely labeling Republican women, Google removed the knowledge panel from the search term.

With Hollywood celebrities and liberals across the Internet are busy attacking “white women” for voting Republican, suggesting that others should “educate” them in order to get them to vote for Democrats, this type of vandalism should have been expected, yet three weeks after Wikipedia corrected the false information, Google was still showing it.

This is reminiscent of the last time Wikipedia publicly humiliated Google when earlier in 2018, the search results for “California Republican Party,” falsely listed their ideology as “Nazism.” 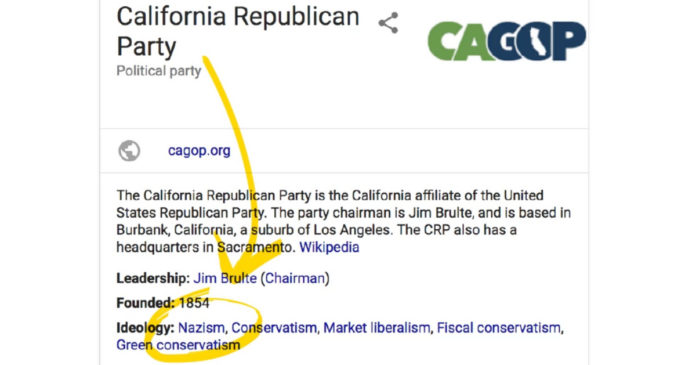 At the time Google blamed “vandalism on Wikipedia,” for the erroneous description that was shown on Googles results page, but that should not give cover to Google when they are clearly aware that Wikipedia allows questionable edits, fixing them at a later date, so Google appears less worried about being accurate than having someone else to blame when their own search page provides fake information.

BIG TECH OLIGARCHS HAVE TOO MUCH POWER AND INFLUENCE

As Google recently made the argument to an appeals court trying to get a lawsuit against them by Prager University dismissed, over their censorship practices by YouTube (both are owned by Alphabet), claiming that holding YouTube/Google accountable for censoring conservatives “would undermine important content regulation.” In the filing, the company said, “If they are bound by the same First Amendment rules that apply to the government, YouTube and other service providers would lose much of their ability to protect their users against offensive or objectionable content — including pornography, hate speech, personal attacks, and terrorist propaganda.”

Their argument appears to be that regulating the company to limit their censorship practices, would have “disastrous practical consequences.”

Independent Media readers are already quite aware of how many conservative Independent Media websites have been adversely affected by big techs censorship practices.  ANP recently dug through our data to find that in the two years since the 2016 presidential election we have seen a decrease of over three-fourths of ad revenue, from Google alone.

Between the manipulation of search results making it very hard to find our articles and they downrank Independent Media while increasing access to liberal establishment media, that massively affects organic traffic, which automatically affects revenue generation.

The Daily Beast provides some percentages and numbers, which offers a very good idea of how much power and influence these big tech companies wield:

• Nearly two thirds of readers now get at least some of their news through Facebook and Google—two companies that employ no reporters and are often in fact hostile to them.

• Facebook and Google accounted for over 89 percent of the growth in online advertising in 2017, it’s exceedingly difficult for new publications to survive online given the dominance of the oligarchic platforms.

Every year, nearly half the world’s population uses Google. According to Internet Live Stats, Google processes over 40,000 search queries every second. In that same second, internet users view over 76,000 YouTube videos, a streaming service designed by Google. Across the globe there are now over two billion active android devices, a mobile operating systemdesigned by Google. Google uses these services to track users and collect information about them.

It’s now reality: Google has monopoly power over the flow of information. Google has control over the dissemination and manipulation of information around the world. Google algorithms can either suppress information or promote it. Because of this, Google Inc. is susceptible to political and ideological censorship, affecting billions of users who use Google services annually. With this power, Google interferes with elections, business, and people’s livelihoods. There are industries and political agendas that influence Google, industries that will do whatever it takes to shut down truthful speech and manipulate how people think.

While ANP saw the writing on the wall and stopped sharing the majority of our articles on Facebook months ago, which is another platform that has been purging conservatives, a high number of them right before the midterm elections, which eliminated over two billion GOP page views, others continued to be dependent on social media platforms, and have had their livelihoods destroyed by their censorship practices.