While everyone debates Red vs. Blue this midterm, cannabis expansion is coming in under the radar for many states

While everyone debates Red vs. Blue this midterm, cannabis expansion is coming in under the radar for many states by Ken Schortgen – Shotgun Economics

In 2016 we saw cannabis legalization expand in places like California and the District of Columbia, and now just two years later this movement appears to be progressing where another seven states could join in the fun. 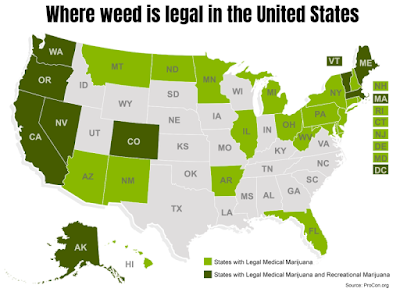 The media and public debate has focused primarily on a Democratic victory (Blue Wave), or a Republic re-energizing thanks to the ‘Kavanagh Effect” from a month ago.  But in every election after the smoke clears, people turn to their own states to see what new political changes were passed which will have an affect on their lives.

With Canada now having fully legalized marijuana use and distribution, and Mexico perhaps standing on the cusp of their own legalization, the United States still remains stubbornly against this inevitable move which could soon have a critical mass of states allowing for its use while the Federal government plays a completely political game of opposition.

Voters in seven states will weigh in on 36 different cannabis proposals Tuesday, everything from the legalization of medical and recreational use to the definition of hemp to the tax on cannabis sales. All of these initiatives have the potential to change how cannabis is produced, sold and used. But there’s more than just those cannabis-specific questions that could change the marijuana landscape after the midterms. Newly elected officials will have the power to set or change state policies. – Forbes

The fact of the matter is, cannabis and hemp could bring about a revolution in business and industry similar to that of the information age when computing power coupled with technological expansion completely changed how the world works.  And at a time when America has very few real industries remaining within its borders, opposition to legalization has few arguments left outside of protecting their cronies in Big Pharma.

Over the past few years, very few movements have triggered both popular and political support like cannabis legalization and a return to sound money (gold and silver) have.  And if tomorrow’s election proves out in favor of one or both of these, then perhaps the U.S. is on its way towards Making America Great Again, as the last time this combination was in play our country’s Presidents were our Founding Fathers.