One America News Network (OAN) Chief White  House Correspondent, Emerald Robinson, dropped a bombshell on Twitter on October 30, 2018, that not only is the establishment mainstream media not reporting on, but if her “source” is correct, one “major newspaper” has “audio recording” proof of her claim, and is sitting on it.

She then continued in that same thread with “My source adds: “Once this story is out, these people will never recover. They were getting paid to ignore the discrimination against their fellow conservatives essentially. Or write pieces claiming there was no need for legislation protecting free speech on media platforms.”

She then concluded “I should add: My fellow conservative journalists & pundits like @seanmdav @julie_kelly2 @KurtSchlichter @thechrisbuskirk @Doranimated @SebGorka @davereaboi will be able to guess which mags took the money because their subscriber base has disappeared after 2016.” 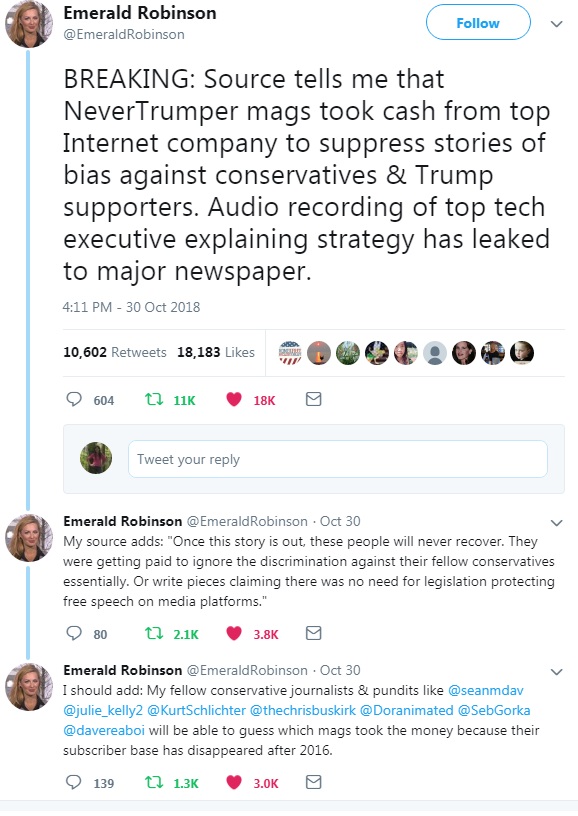 Nearly two days after dropping that bombshell, no other major media outlet has even addressed it, or if they have, they are not showing up on any searches, using a variety of keywords, although I did run across a reference of it at the website Powdered Wig Society, which just happens to be one of the websites who had their pages arbitrarily deleted by Facebook back on October 11, 2018, along with 800 other pages and accounts.

Fascistbook shut down my main page, Powdered Wig Society (300,000 followers) and both of my personal pages as part of the “great purge” of conservative publishers on October 11, 2018, just in time for the midterm elections. Certainly a coincidence, yes? Fascistbook also left two of my other pages and two groups without an admin by shutting down the personal accounts of the admins of both pages and both groups. I am also shadow-banned on Twitter. My posts there are virtually invisible. My Twitter engagement is next to zero. Thus, I have no real social media presence.

Over the past two years, I have watched helplessly as the goons at Fascistbook have systematically squeezed off my traffic and revenue by 98% since our peak before President Trump’s election.

This is a common pattern among Independent Media, as almost all of us that were making ends meet before the 2016 election have been strangled, blocked, shadow banned, and are now forced to depend on the kindness of reader donations in order to survive the censorship from big tech and social media.

Bookmark PWS, even if you just visit once a day and read, it helps and Independent Media must not look at each other as competition, but rather as a helpful Independent voices fighting against the mainstream liberal narrative.