Something Huge Is Happening And The Media Is Ignoring It

Something Huge Is Happening And The Media Is Ignoring It – I Blame President Trump For Both ‘BLEXIT’ And The #WalkAway Movement – Introducing BLEXIT: ‘The Black Exit From The Democrat Party’ By Susan Duclos – All News PipeLine

The media had a busy week last week, blaming president Trump for a man, who happened to be a Trump supporter (even had a “Trump-mobile to prove it), who sent 13 “pipe bombs” to a number of high profile liberals, none of which actually exploded of course, but we still see liberals claiming he was trying to “assassinate” the liberals they were addressed to, even though none of which opens their own mail.

Then the media blamed President Trump for a Trump-hater, anti-semite, white supremacist that opened fire art the Tree of Life synagogues in PA, killing 11 people.

To the media, everything is President Trump’s fault, including their own credibility problem, because President Trump often calls them out for their “fake news,” to which many have documented the increasing frequency of said “fake news” from liberal media outlets.

The problem for the media there is…. history.

Trust in the media has continued to fall since 1977, with little ups and downs, but they haven’t had more than 50 percent of the public’s trust since 2006, long before president Trump ever entered the political scene. As of the latest September 2018 Gallup survey, they are still under water, with only 45 percent having any trust, and 54 percent having not very much or none at all. In fact, out of the 45 percent that have any trust in the media, only 14 percent list their trust level as a “great deal.”

At that same link we see the latest bias poll of the media was in July 2017, where 63 percent of the public saw a bias in the establishment media, with 29 percent thinking the media favors neither. Of those that saw bias, 13 percent felt the media was biased for Republicans, with 43 percent seeing a liberal bias.

The point here is that it is not President Trump’s fault the majority of the American public does not have a great deal or any trust in them, they have done that to themselves. The president just calls them out on it.

WHAT THE MEDIA DOESN’T BLAME TRUMP FOR, YET HE WAS THE CATALYST

I am not going to get into the economic numbers nor individual policy issues, but there is something big going on that the media is ignoring and it very much the fault of President Trump and in large part the media’s fault too.

Two movements that have been growing exponentially since the 2016 elections. 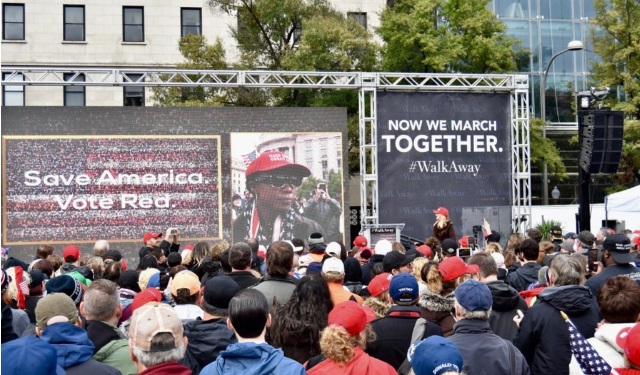 As many know the #WalkAway campaign began about five months ago when a gay hairdresser from New York, Brandon Straka, created a video which went mega viral, explaining how he was an Obama supporter, a lifelong Democrat and decided he had to #WalkAway from Democrats, and he listed his reasons why.

From October 26 through Octover 28th, that movement grew further as Straka organized a hugely successful March which drew hundreds of supporters from all across the country to the Freedom Plaza in Washington DC on Saturday. The #WalkAway attendees were joined by die-hard conservatives as part of the #WalkWith segment of the group, who showed up in support of the those walking away from the Democrat party.