Message To Hollywood: We Do Not Care What You Think

Message To Hollywood: We Do Not Care What You Think By Susan Duclos –  All News PipeLine

TDC Note – As Breitbart reported earlier today – 86% of Tennesseans DO NOT care about Taylor Swifts voting preference. Well guess what; 100% of the Tennessee based staff of The Daily Coin (that’s me) do not care what Taylor Swift says or does with her vote, never have, never will.

Why is it that Hollywood celebrities think they can preach to Americans, tell them what to do, who to vote for, what to think? Even more annoying is seeing the women in Hollywood, I call them the “Hollywood Bimbos” making sweeping statements about how “women feel,” without a clue as to how anyone outside their liberal, Hollywood bubbles actually thinks or feels.

Case in point: Alyssa Milano, attention whore supreme, is one of the Hollywood bimbos spending “unprecedented” time attempting to influence the midterm election results, claiming “This is all personal now. And when we are seeing our rights stripped away, we’re scared. Women are scared.”

No, “we” are not scared. Milano may spend her nights shaking in her boots over the probability that Republicans will retain control of the Senate, but those of us not in her bubble, and I am speaking for myself, and others that think like me, would be more worried giving control of the Senate to likes of Democrat Diane Feinstein.

During the Kavanaugh hearings, it was Feinstein who was in possession of the Christine Blasey Ford letter accusing Brett Kavanaugh of sexual assault over 35 years ago, when they were teenagers. It was Feinstein that recommended the attorneys that Ford hired. Three groups had knowledge of and possession of that letter. Feinsten, Ford, and Ford’s attorneys….. and one of those Democrats leaked it to the press, which exposed Ford’s identity to the media and the public.

The GOP didn’t do that.

Lets look at a more recent example of why claims that women are, or assertions by Hollywood bimbos like Milano and Amy Schumer, that women should be scared of Republicans more than they should be concerned over Democrats in power, are complete BS. The recent egregious blunder on the part of Democrat Senator Heidi Heitkamp, who ran an ad presented as an open letter from sexual assault survivors to her Republican challenger Representative Kevin Cramer.

The blunder came when she revealed the names of the women without their permission. Even worse, at least one of the women named claims that not only she didn’t give Heitkamp permission to use her name, she doesn’t support Heitkamp and she isn’t even a domestic abuse survivor. She then went on to ask “Should this even be legal? Using people’s names as part of your campaign?” 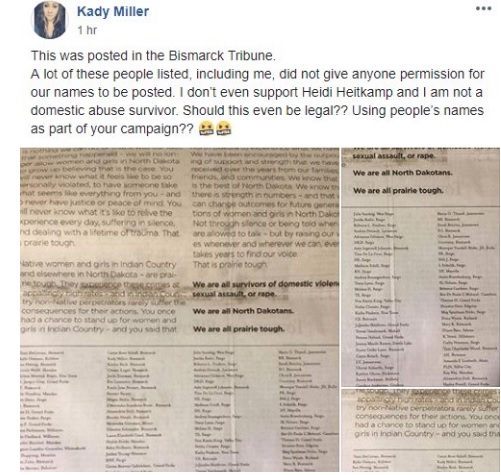 Granted Heitkamp acknowledged the blunder, accepted responsibility and gave a long and apparently heartfelt apology, stating it was her campaign, she owns it, but the point here is Republicans didn’t do that, Democrats did.

In fact Democrats and Hollywood celebrities, both male and female, seem to have no problem using and abusing women for political gain. Democrats use them then throw them under the bus after they have either accomplished their goals, or tosses them aside if they didn’t help the way Democrats intended. Hollywood for their part, seems to thrive on acting like all women are victims, while claiming they are being empowered.

How can one be both? There is nothing “empowering” about acting like everything the GOP does makes them a victim somehow.

That is weak, pathetic….not strong.

MESSAGE TO HOLLYWOOD – MOST AMERICANS DO NOT CARE WHAT YOU THINK

During the 2016 presidential campaign, Hollywood celebrities came out en masse to campaign for Hillary Clinton and against Donald Trump. They created embarrassing videos telling people how “important” it was to get out and vote, and more importantly who they should not vote for. They narcissistically repeated the same theme about how important it was to get “famous people, a lot of famous people, a ton of famous people……etc” to get together to tell Americans what to do.