A Woman’s Take On The Den Of Vipers In The Media & The Crazed Reactions To Justice Kavanaugh: The Outrage Phase Begins With ‘Visceral Screams’ Of Rage By Susan Duclos – All News PipeLine

TDC Note – Screaming is not an argument, it is simply screaming. Facts are what make an argument – facts with opposing views makes for a realistic argument. Emotions are not an argument, they are how YOU FEEL. I don’t care how you feel, what are the facts?

Shortly after the Senate voted 50 to 48 to confirm Judge Brett Kavanaugh to the Supreme Court, a private ceremony was conducted to swear him in, making him Justice Kavanaugh.

Anybody that has seen any news over the past few weeks already knows how hard democrat politicians fought against his confirmation, and how protesters attempted to derail it, how celebrities bitterly took to social media declaring it wouldn’t be allowed, as liberal activists crawled out of the woodwork to make “outlandish” claims against the nominee, so I won’t go into detail about the events prior to the swearing in.

The reactions coming out since Justice Kavanaugh was confirmed and sworn in, indicates the “outrage phase” has begun as journalists take to their op-ed pages to enrage even more liberals who immediately run to their social media accounts to share that rage. 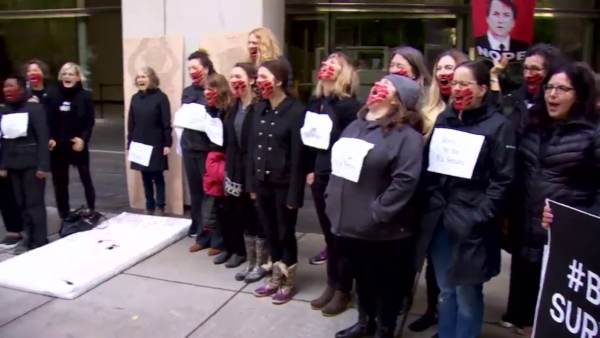 The level of outrage incited in large part by the establishment media that reported “claims”  and some outright lies, as if they were proof of wrongdoing without any type of corroboration, now extends into the aftermath. Liberal “journalists” taking to the op-ed pages of major newspapers to have their temper tantrums because they failed in their coordinated attempts to force Justice Kavanaugh into quitting and President Trump into withdrawing his nominee, as liberals on the Internet take to social media to express their outrage.

The MSM And Liberal Writers: Bloomberg’s Editorial Board headlines “Kavanaugh’s victory is a loss for America.”

Note– I am seeing a lot of articles using that term, quite literally calling Kavanaugh a rapist, despite the fact no one accused him of actual rape, not one police report was filed against him, and not one shred of evidence other than 35 year old allegations without any corroborating evidence has come to light in any of Kavanaugh’s seven FBI background checks and/or supplemental interviews. That is libel, slander and done maliciously and I hope Kavanaugh sues their butts off.

Huffington Post claims in their headline that the “Senate rejects the Me Too movement.” They haven’t, but they should because the practice of destroying someone’s reputation and career without due process is a disgrace. Yes, victims of sexual assault should speak up, file a police report, demand and investigation, but just saying “He attacked me,” is not enough in America to conclude a man is guilty.

Over at Vox, the writer asserts that “Republicans don’t care what you think.”

That is just a small sample of headline assertions, but the screeds that follow are full of morally superior outrage because they couldn’t stop President Trump’s second Supreme Court nominee from being confirmed, despite throwing what was left of their credibility out the window in their attempts to control the outcome, and failing.

These are temper tantrums, pure and simple.

For example, one of the more radical takes is from Alexis Grenell at the New York Times, who titles her piece “White Women, Come Get Your People.”  Grenell apparently believes that due process is nonsense, women that supported Justice Kavanaugh are “gender traitors” (who died and made her the authority on women?) and she really lost me when she said “my stupid uterus still holds out some insane hope of solidarity.”

FrontPage has a good breakdown on that particular racist, man-hating screed.

Okay….. time for her to step away from the keyboard, and what on earth was the New York Times’ editors even thinking allowing that hot mess on to their opinion pages?

The media is dead…. they don’t know it, they think they are still breathing, but at this point it is like a chicken running around without a head.

Liberals On Social Media: If the temper tantrums at major newspapers and opinion editorials are full of self-righteous outrage, the reactions of liberal outrage on social media is even worse. Crying, raging, howling and viscerally screaming….. all because a Judge was confirmed to the Supreme Court, because the establishment media terrorized them into thinking the world would end if it happened.

So, of course, the world is ending in their not-quite-sane minds. 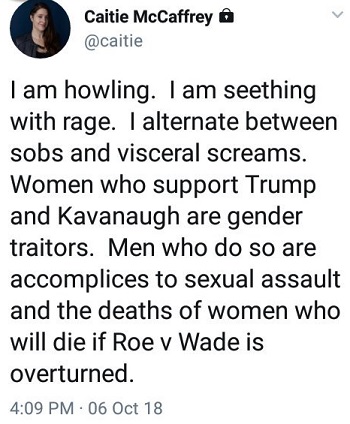 Soap opera actress Nancy Lee Graham took to Twitter on October 5 after it became known that the Senate had the votes to confirm Kavanaugh, to tell her followers “Just pulled my car over & screamed gutturally for a good 2 min & then cried for 10 more…..” This is the same person that calls Jeff Flake a “hot mess” in a later tweet. The same person that spews her outrage publicly on Twitter, on an account that is not private, nor locked so only her followers can see, then complains about the responses she gets from those that do not agree with her by stating “My feed is filled with privileged, white, beer guzzling sacks of nasty sick who have nothing in their lives other than harassing women mourning their country.”